Earlier this week, part numbers for upcoming Apple hardware updates surfaced, with claims that the parts represented new MacBook Air and Mac Pro models. While the MacBook Air part numbers are believed to be legitimate, the claim regarding the "Mac Pro" part numbers was later revised to state that they referred to new Mac mini and MacBook models.

But even that revised assertion isn't entirely correct, as while the Mac mini numbers are assumed to be correct, the part number ascribed to a new MacBook is in fact for a new Thunderbolt-enabled LED Cinema Display. 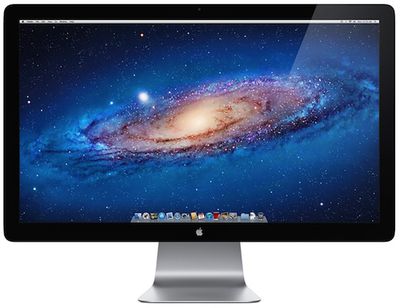 Apple has even confirmed that information by prematurely posting a new image on its site depicting the display and identifying it in the URL as the "MC914" part that had been previously thought to be a new MacBook. The display appears essentially identical to the existing LED Cinema Display from the front, although Apple's new promotional image displays a Lion desktop background rather than the Snow Leopard one found on the images for the current model. The rear of the display will obviously include a Thunderbolt port in place of the current mini DisplayPort connection.

Additional gallery images also show the new display paired with a number of Apple's Mac products, all of which show the same form factor as the current models, suggesting that the Mac mini scheduled to appear alongside the new display (which appears here as the Mac Mini Server model) will retain its current form factor. Apple's Mac Pro has been rumored to see a redesign, but appears set to debut a few weeks later than the new display, meaning that Apple would need to continue showing the new display alongside the current Mac Pro until that time. Consequently, the new image showing the Mac Pro likely offers no insight into whether or not the Mac Pro will be seeing a redesign.

Update: We've spotted a new image depicting a MacBook Pro connected to two LED Cinema Displays daisy-chained via Thunderbolt. This feature would only be compatible with 15-inch and 17-inch MacBook Pros of the current generation supporting Thunderbolt.

Update 2: While not revealing any new products, a number of images of Apple's existing products are also starting to be updated in Apple's online stores to show the Lion desktop background instead of the Snow Leopard one. For example, Apple's iMac page has had its graphics updated to show a Lion desktop, while other machines elsewhere in the store are still showing Snow Leopard.

Update 4: The LED Cinema Display is back on the store.


Just because the product code is a thunderbolt display and not a MacBook doesn't mean the MacBook is becoming discontinued.
Score: 19 Votes (Like | Disagree)

mattwolfmatt
Surely, one of these rumors has to be correct.
Score: 14 Votes (Like | Disagree)

Wow. Simply Brilliant. Apple with unexpected. This will go nicely with my ipad2, iphone4 (white and black), macbook pro, and imac. Cant wait to get the mac pro. I am seriously considering moving next to the nearest apple store.

Steve, you have done it again! Simple genius. Sit down windows, this display shows why you are declining.


Can't tell if your sarcastic or not.
Score: 13 Votes (Like | Disagree)

Someone please get it right.

This just in.... Those part numbers are NOT for Mac Book Airs or Mac Books or Cinema Displays or Mac Pros or even Mac Minis. My source tells me that they are new all-leather iPhone 4 bumpers in various colors. Supposedly the names of the colors that Apple is going to offer are beige, earth (dark brown), black, crimson (dark red), hunter (dark green), and midnight (dark blue).

These new bumpers are being delayed until the release of OS X Lion because an iPhone 4 wrapped in the new leather bumper will not be able to sync with iTunes running under Snow Leopard. Supposedly, these bumpers are going to be exclusively compatible with OS X Lion and with iOS 4 as well as the upcoming iOS 5 (though support is not yet implemented in the current beta).

You heard it here first. This is going to be both magical and revolutionary!
Score: 11 Votes (Like | Disagree)

Daisy chaining other thunderbolt products through the display. It probably has a FaceTime HD camera as well.