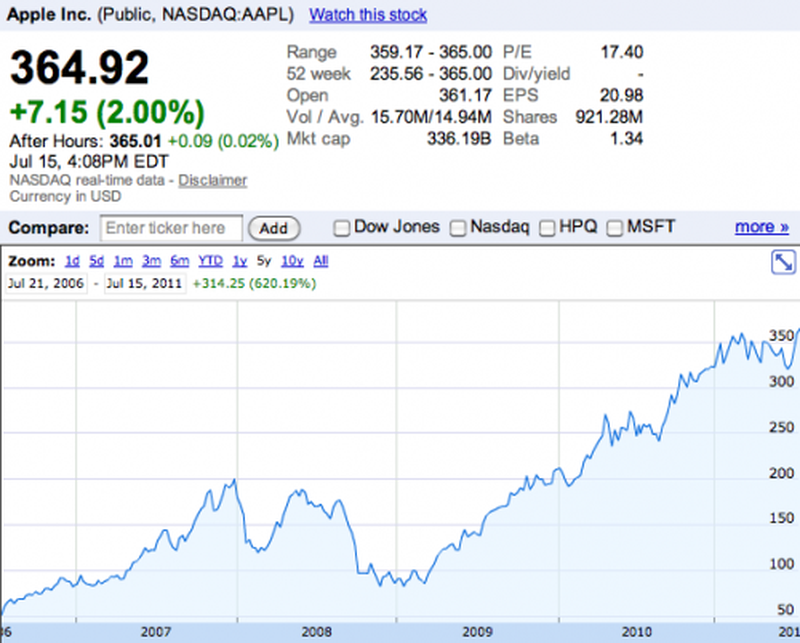 Rumors have been flying over the past few weeks about new products, including new MacBook Airs, Mac Mini's, Mac Pro's, the next iPhone, and new versions of the OS X and iOS. Investors seem to be pretty enthusiastic about the new lineup that Apple has in the pipeline.

Wow that's gone up a lot. I bet we see a lot of people cashing out around now and it goes lower tomorrow, but Apple is definitely doing very well.

It won't be going down tomorrow. The markets are closed.

When Steve steps down or dies Apple stock will temporarily tank, but it will go back up quickly once people realize that there are other talented people working there. And when that happens if I have spare money sitting around I might be tempted to buy some.


yep. I plan on buying shortly after his death. I do not see it recovering to the point that it was since the Apple fansboys/girls god is dead so his media part will be dead but I do see it recovering.
and by dropping I mean it will be tanking a lot. I would not be shocked in the least to see Apple stock go below 50% of its current value at his death.
With thinking like that you probably should avoid investing real money.
Rating: 5 Votes

Morod
I sure hope Woz still has some shares left.
Rating: 4 Votes

Im putting in €10000 into apple shares on monday through an online broker, should I put it in before the market opens on monday or wait until after?? Need advice please!!!!


Here's some advice: be very cautious about taking investment advice from a board (like this one). especially with that amt of money.
Rating: 3 Votes

Im putting in 10000 into apple shares on monday through an online broker, should I put it in before the market opens on monday or wait until after?? Need advice please!!!!


5000 before and 5000 after. Usually it is not advisable to buy in the pre-markets since you tend to overpay, the volume is less and the price is inefficient. But if you have a specific buy price, then it does not matter.
Rating: 3 Votes

i cant really see a huge product fail, but i think you're correct about steve its going to collapse when that happens


It will surely drop in the first moment, buti's not going to collapse.
Microsoft is the best example how a company can keep their revenue and market value even with a ridiculously lousy leadership after BG's departure. Apple is in a similarly strong position. People will still buy the products even without SJ at the helm. The company is simply too big now and in too good of a position that it can be ruined quickly. And it's not that the people behind SJ are suddenly gonna do a bad job.
Rating: 3 Votes

Why couldn't have I gotten into this even last year? Damn...


you could have gotten into this two weeks ago and you'd be up $40 a share
Rating: 3 Votes

samcraig
Wal-Mart - which for many years was a growth stock and some still consider it so - has always offered a dividend. And plenty of other growth stocks offer dividends.

It's very telling of some people who post here who pull facts out of their butts just to prove their opinion vs stating an actual fact.
Rating: 2 Votes

RobertMartens
when Jesus died the church actually got bigger though they did make a few big mistakes along the way
Rating: 2 Votes

Brien
I convinced my family to buy in when it was around $12/share in the early nineties. Smartest decision I ever made.
Rating: 2 Votes
[ Read All Comments ]