Research firms Gartner and IDC today released their preliminary quarterly personal computer shipment data, offering up a picture of market performance during the second quarter of 2011. Overall, the PC industry exhibited small growth on a worldwide scale, with unit shipments growing by about 2.5% between the second quarters of 2010 and 2011. But shipments in the U.S. actually declined year-over-year by about 4-6% according to the two firms. Gartner in particular points to the iPad as having had a detrimental effect on PC shipments for the quarter.

"Given the hype around media tablets such as the iPad, retailers were very conservative in placing orders for PCs. Instead, they wanted to secure space for media tablets. Some PC vendors had to lower their inventory through promotions, while others slimmed their product lines at retailers," [Gartner analyst Mikako] Kitagawa said.

According to Gartner's report, Apple surged into third place in the U.S. market, up from fifth place a year ago and even as recently as last quarter, grabbing a 10.7% share, up significantly from an 8.5% share in the prior-year quarter. 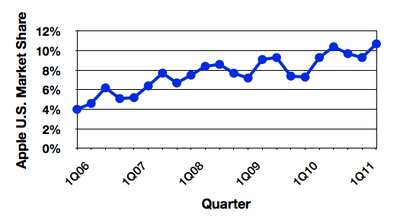 Apple's U.S. Market Share Trend: 1Q06-2Q11 (Gartner)
Apple's U.S. unit growth for the quarter was 8.5% year-over-year according to Gartner, well ahead of the overall U.S. industry trend of a 5.6% decline. Only Toshiba at 3.3% joined Apple among the Top 5 manufacturers increasing their shipments year-over-year.

As usual, neither Gartner nor IDC covered Apple's worldwide performance for the quarter, as the company does not rank in the top five by global shipments. But given that the worldwide market experienced only about 2.5% year-over-year growth, Apple appears to be continuing to make up ground on the rest of the industry.


Evidence to back this up?
Score: 7 Votes (Like | Disagree)


Look, if you're going to blatantly make up stuff, at least make it interesting:

"Most converts only use their Airs as door stops"

Thanks for proving my point that you have no evidence. Sorry that you made the unfortunate decision to buy Apple hardware to use as a Windows gaming machine. Kind of a waste of money there. Your post really only proves info about you and not the market at large.
Score: 5 Votes (Like | Disagree)

res1233
It just keeps going up! The future sure looks interesting. I wonder what Microsoft would do if Mac OS's market share was ever on par with Windows? It looks like a real possibility in the future if this growth continues.
Score: 5 Votes (Like | Disagree)

I have a personal quibble with Apple's market share.

PC users may have a bigger market share as global, where as Apple does market share from a U.S only standpoint, (which you might as well say), unless you live in the U.S, the market share won't concern you.

As a non-U.S resident, i do believe it but only for U.S, but to me, here in Australia, doesnn"t mean squat.. We all know there are more PC's out there. It seems Apple like to have like their own "mini" market share centralized to only local.

Thursday December 8, 2022 7:05 am PST by Joe Rossignol
iOS 16.2 is expected to be released next week following nearly two months of beta testing. With last-minute additions like Apple Music Sing and Advanced Data Protection, the software update now has over a dozen new features for the iPhone. Below, we've recapped many of the new features coming with iOS 16.2, including Apple's new whiteboard app Freeform, two new Lock Screen widgets, the...
Read Full Article • 62 comments