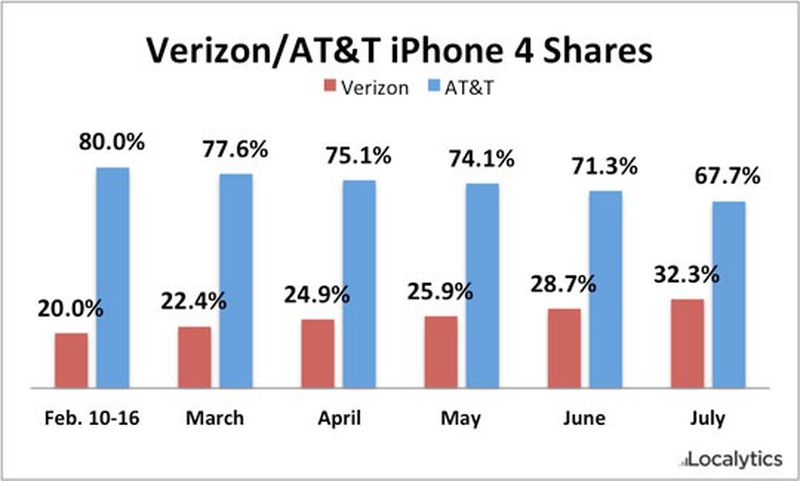 Mobile app analytics firm Localytics yesterday published a widely-cited report measuring the ratio of AT&T to Verizon iPhone 4s in the United States, finding that a surge over the past two months has increased Verizon's share to over 32% just four and a half months after the device launched on the carrier.

Summer has seen significant growth in Verizon's market share. After spending most of the spring at roughly the same share, Verizon has seen consecutive monthly jumps, grabbing 7% of the market for itself in May and June.

Why the recent uptick in Verizon adoption? One reason may be Verizon's unlimited data plan, which they are scheduled to do away with on July 7th. AT&T officially discontinued its unlimited data plan in mid-2010, although existing customers were allowed to keep their plan as long as they remained AT&T customers.

We do, however, have significant reservations about Localytics' data and how closely it correlates to actual device sales, based on what is known about iPhone activation numbers. Looking back at earnings releases from the two carriers, Verizon had announced 2.2 million iPhone activations as of the end of the March quarter, at which point in time Localytics data put Verizon's share of the U.S. market at 22.4%. In order for Verizon to have held that market share, AT&T would have had to have activated on the order of 7.6 million iPhone 4s by that time.

AT&T's iPhone 4 sales numbers are harder to gather due to a mix of iPhone 4 and iPhone 3GS sales, but total iPhone activations for the carrier appear to be in the range of 15 million since the launch of the iPhone 4 last June. It is true that AT&T's iPhone 4 sales are clearly somewhat lower than that given the inclusion of some new iPhone 3GS sales in that number and the fact that AT&T also counts used units that are resold or handed down and reactivated by new users, but we find it hard to believe that new iPhone 4 sales were only responsible for half of AT&T's total iPhone activations over the period.

:cool:who cares if this report is bogus or not. i just got my verizon iphone in may and i am in phone heaven. i love the iphone cause its so easy to operate and has the best apps. Its the best phone i've ever had. i had an ipod touch 4g which made me want the iphone so i was so glad to get it. Plus another reason i got it was i had heard rumors that Verizon would be getting rid of their unlimited data plans this summer and sure enough they are now gone. My friend has the HTC thunderbolt and she has had SO many problems with it. I'm so glad i got the iPhone. ;)I know an even better iPhone is coming out soon but im so satisfied with this one. Tech savy or not, the iphone is the best. That's all that matters!:cool:

by the way I do have wifi and know a little bit about computers. :)
Rating: 2 Votes

SandynJosh
Left out of everyone's comments and left out of the story is that for the last several months or so the early purchasers of Verizon Android and BB phones hit their contract end. Maybe not new Verizon customers, but iPhone buyers who are tossing their old sorta-smart phones. I know I'm watching the calendar to drop-kick mine into the parking lot.

Also, we are about two months away from the next iPhone... I'm hoping it will be another "giant leap for mankind." Meanwhile Microsoft's phone OS has surpassed the iPhone iOS capability of late 2007. Ballmer needs to get to work on his resumé.
Rating: 1 Votes

It's even less scientific than the numbers cited, but every person I know that got a Verizon iPhone is what I would consider a low tech person. For example, of the 4 people I know with a Verizon iPhone, 3 of them do not have WiFi in their house, and when one of them asked me to help them decide between an iPhone and Droid before buying, the conversation included the phrase, "What is iTunes?" (from a person below age 30). On the other hand, the 10 or so people I know with AT&T iPhones range from mid to advanced tech savvy, and none of them have switched carriers since the Verizon iPhone went on sale.

I offer this as thin, anecdotal evidence that Verizon has a greater proportion of late adopters that are not tech savvy. So, they are going to use more cell data instead of WiFi and likely not be selective of where and how they make large downloads. This would be a reason why a web analytics firm using traffic of certain web sites may get misleading statistics.
Rating: 1 Votes

goobot
I doubt Verizon got 20% of the total iphone 4 market for the first week of sales, after the poor show ups in stores, online alone with that % seems incorrect.
Rating: 1 Votes
[ Read All Comments ]