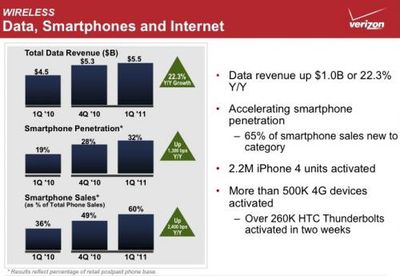 It's been a busy couple of days for Apple-related earnings announcements, with AT&T and Apple releasing their data yesterday and Verizon following suit this morning. In a slideshow presentation (PDF) accompanying the release, Verizon reveals that it activated 2.2 million CDMA iPhones during the quarter. The carrier began selling the iPhone to its existing customers on February 3rd, following that up with a wider launch to all comers a week later.

Overall, Verizon reported increased earnings compared to a year ago and just slightly above analyst expectations, although the stock has slipped a bit as it begins trading for the day.

Apple yesterday reported shipping a record 18.65 million iPhones during the quarter, although that number also included devices distributed into the sales channel for sale by retail partners, while Verizon's number strictly includes devices sold. AT&T announced that it had activated 3.6 million iPhones during the quarter, but that number obviously includes a full quarter of sales rather than the under two-month period for the Verizon iPhone. AT&T's activation numbers have also historically included both new handsets and old ones that may have been handed down or sold and reactivated for new contracts.

I'm surprised nobody noted that AT&Ts sales totals include the $49 3GS sales for a large amount of this quarter.

Which includes hand-me-down or resold iPhones being activated on a different line.
Score: 1 Votes (Like | Disagree)

I'm surprised nobody noted that AT&Ts sales totals include the $49 3GS sales for a large amount of this quarter.

Has AT&T broken out their sales figures for the 2 iPhones? Did any sites make any estimates about the breakdown?
Score: 1 Votes (Like | Disagree)

Both AT&T and Verizon have flaws, but Verizon is, by far, the lesser of two evils. If an Early Termination Agreement wasn't an issue, why on earth would anyone choose AT&T over Verizon?


umm people like me who have been screwed by Verizon and on top of that were I tend to go AT&T has better coverage.

Go ask Jav his feelings on Verizon. He hates them.

So, let's see how this breaks down:

That works out to roughly:

Yeah, I'd say Verizon did quite well despite the naysayers who think AT&T was selling more of them (when it took them almost twice as long to get those numbers).

well Verizon had pent up demand AT&T did not have that pent up demand. It will more have to wait until iPhone 5 to get a better read on the numbers.
Score: 1 Votes (Like | Disagree)

jav6454
How many were new to Verizon, how many were just Android converts?
Score: 1 Votes (Like | Disagree)

Both AT&T and Verizon have flaws, but Verizon is, by far, the lesser of two evils. If an Early Termination Agreement wasn't an issue, why on earth would anyone choose AT&T over Verizon?


AT&T is absolutely terrible in my area. However, I like that GSM works around the world AND the simultaneous data & voice capability.
Score: 1 Votes (Like | Disagree)