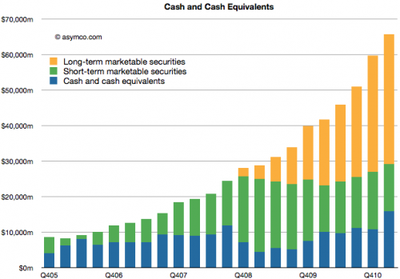 Apple had just over $65 billion in cash and marketable securities at the end of the last fiscal quarter, according to the company's quarterly filing (PDF). Apple has so much cash, it was pointed out last month, that its cash on hand exceeds the market capitalization of Nokia, RIM, HTC and Motorola Mobility combined. If Apple had no revenue, its cash-on-hand would sustain operations through the middle of 2018, more than seven years.

What's Apple doing with all that cash? An anonymous writer on the Q&A site Quora opines that the company uses the money to small-scale strategic advantage, purchasing entire factories for suppliers and using that leverage to guarantee supply of components for Apple -- and no one else:

Apple has access to new component technology months or years before its rivals. This allows it to release groundbreaking products that are actually impossible to duplicate. Remember how for up to a year or so after the introduction of the iPhone, none of the would-be iPhone clones could even get a capacitive touchscreen to work as well as the iPhone's? It wasn't just the software - Apple simply has access to new components earlier, before anyone else in the world can gain access to it in mass quantities to make a consumer device. One extraordinary example of this is the aluminum machining technology used to make Apple's laptops - this remains a trade secret that Apple continues to have exclusive access to and allows them to make laptops with (for now) unsurpassed strength and lightness.

This past January, Apple COO Tim Cook said something similar on the Q1 earnings call:

On the operational side of the house, as you probably remember, we've historically entered into certain agreements with different people to secure supply and other benefits. And the largest one in the recent past has been we signed a deal with several Flash suppliers back at the end of 2005 that totaled over $1 billion because we anticipated that Flash would become increasingly important across our entire product line and increasingly important to the industry. And so we wanted to secure supply for the company, and we think that, that was an absolutely fantastic use of Apple's cash. And we constantly look for more of these.

It is thought that Apple made another one of these deals earlier this year, agreeing to spend $3.9 billion on LCD panels. It was rumored that RIM's iPad competitor, the PlayBook, was delayed because RIM couldn't acquire enough LCD panels for production. Apple feels these payments are "very strategic" and a good use of their capital.

However, not everyone is impressed with this line of reasoning. One fund manager, Christopher Bonavico at Delaware investments, said Apple is "destroying value" by sitting on so much cash, and complained that the cash is "earning near zero". Bernstein Research analyst Toni Sacconaghi said the cash pile has "been beyond the point of being rational for a while now."

Apple, for its part, seems perfectly happy to sit on the cash, which allows it to quickly make large purchases when strategically necessary.

Mak47
Sounds like a good business plan to me. It's got to be frustrating for Apple's competitors, but there's never been anyone telling them they can't do the same thing. RIM was the market leader for quite some time but they never thought to use their money wisely like this.

The author mentioned an analyst that states Apple's cash is earning near zero and therefore must be dumped. That guy is an idiot. Apple's cash is what allows the company to buy in massive quantities and lock up segments of the market before anyone else can touch them. It may not be earning returns in conventional ways, but to say the cash isn't working for them is just plain stupid.

itsthenewdc
A company saving its money.. how devastating..
Score: 16 Votes (Like | Disagree)

*LTD*
Bernstein Research analyst Toni Sacconaghi said the cash pile has "been beyond the point of being rational for a while now."

Apple's success is also beyond the point of general conception. Way beyond.

This is not monopolism. It's dependent on one thing: Apple's products being market-creating. That depends on the engineers. Of course, anybody can play the same game, but its competitors insist on playing the other one: let's make something that's really close to what Apple has shown there's a big market for. Copy, copy, copy. (I don't know or care about the legal issues, but it's the business issues -- who do you want to work for, the company that made up the iPod, the iPhone and iPad, or one of the many, many imitators?
Score: 10 Votes (Like | Disagree)

From an investor point of view it could be frustrating. You are investing money in a company, and that company is just holding onto that money as cash. Most companies want to have some % of their expenses in cash for various uses. Having too much money can make investors upset.

But, Apple is not a standard company, so they can play by different rules in the stock market.


Technically, no one is investing money in Apple. They maybe buying existing shares in Apple, but they are not actually investing a dime in Apple's business, they are merely buying a share of the business.

And when you buy a share in Apple, you are simply buying the share off of another Apple shareholder, you are not buying the share from Apple. So technically your cash is not being held onto by Apple.
Score: 8 Votes (Like | Disagree)

"... uses its cash to keep latest technology to itself"? What a sensationalist, misleading choice of words. How about "wisely leverages large cash reserves to develop new technology and give itself a competitive edge"?
Score: 7 Votes (Like | Disagree)
Read All Comments

Sunday February 5, 2023 6:07 am PST by Joe Rossignol
Apple has discussed selling a new top-of-the-line iPhone alongside the Pro and Pro Max models in 2024 at the earliest, according to Bloomberg's Mark Gurman. Based on this timeframe, the device would be part of the iPhone 16 lineup or later. In a September 2022 edition of his weekly "Power On" newsletter, Gurman said there was "potential" for an iPhone 15 Ultra to replace the iPhone 15 Pro...
Read Full Article • 426 comments