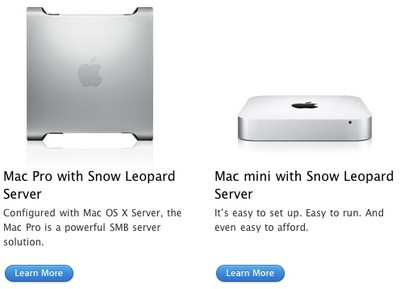 According to 9 to 5 Mac, trusted source Mr. X has indicated that supplies of the server models of Apple's Mac mini and Mac Pro lines are officially listed as constrained, suggesting that Apple may be drawing down supplies ahead of a refresh.

In addition to OS X Lion, our sources are already expecting new MacBook Airs and Time Capsules fairly soon - due to supply shortages and now Mr. X tells 9to5Mac that Apple's Mac mini Server and Mac Pro Server are constrained with no shipment date yet in place for new models.

Apple introduced the Mac mini server option, which substitutes a second hard drive for the usual optical drive, in late 2009. The Mac Pro server configuration debuted last November as the company announced the pending discontinuation of its Xserve rackmountable server. A report earlier this year indicated that Apple was developing a smaller, narrower Mac Pro that could be rackmounted, although much larger than the previous Xserve.

It seems reasonable to assume that the all models of the Mac mini and Mac Pro could see updates alongside refreshes of the server models, as the machines share the vast majority of their specs.

Anyone who has read Apple's own press materials on OSX Lion Server will notice that they are heavy on the "any mac can be a server" language. I think the server models are being discontinued as Apple tries to position the 'server' as less of a hardware implementation and more of a software implementation. This is why only the server versions of the more-or-less same hardware is constrained.
Score: 13 Votes (Like | Disagree)

I'm hoping we see Apple embrace the concept of the Mini as a home media system. With the Mac App Store, all they need to do is tweak up the graphics and develop an awesome looking game controller and the Mac opens up a whole new platform. There are so many possibilities with that machine.


I think that the Mac Mini has a lot of potential. I used to look down on them until I started reading a lot of the posts here at MR by owners. One of the things that I don't understand (and there are a bunch) is why does Apple limit the potential of these machines by using laptop components? Yeah, I do realize that it is small, but why is it that small. This is a desktop computer. Why not make something the size of the G4 Cube and use some real and less expensive components? I read a comment recently where someone was talking about the current iMac and making suggestions on how they could make the iMac 50% thinner! I don't know why it is as thin as it is now. These are desktop computers, they do not need to be so small that they can fit into a woman's purse! These are desktop computers and desktop computer buyers want as much performance as possible. So stop hobbling these computers for the sake of style over substance.
Score: 8 Votes (Like | Disagree)

dkouts
Thrilled when see the word "Pro" at all any more from Apple.
Score: 7 Votes (Like | Disagree)

snebes
Interested to see if there will be a rackable version of the MacPro now.
Score: 6 Votes (Like | Disagree)

rquick
It's such a crying shame Apple deliberately cripples the mini so badly. I think they desperately need a desktop alternative, but they just don't want to make a box to compete with the higher profit iMac. Everyone who wants an Apple desktop is forced to buy a new display, whether they need it or not, or a full workstation class machine, whether they need it or not. They also constrain the cases so that fewer people are tempted to buy and install non-Apple parts where Apple doesn't get their enormous markup. I like to upgrade often as tech improves, but I am not willing to junk the display or prevent myself from installing the parts I want. Displays don't improve as fast as other hardware so it makes no sense for me to tie them together. Otherwise I would be fine with buying a Mac desktop every year or so and pass them down to my family. As it is, I just assemble my own with non-Apple hardware with Windows 7 and it works fine. I guess Apple loses and I win. And before everyone thinks I am an Apple hater, I'm working in OSX on a 2010 MBP 17" right now. But I'm going upstairs to play Metro 2033 on my windows rig. Just kinda silly there is no real Mac alternative for that.
Score: 5 Votes (Like | Disagree)
Read All Comments