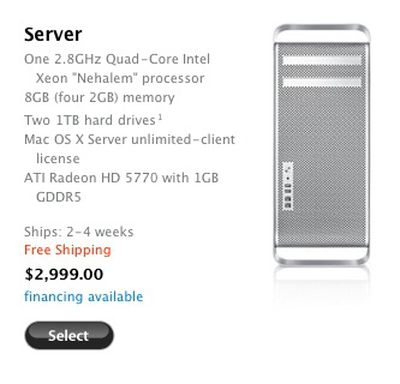 One item of interest that was overlooked in this morning's news that Apple is discontinuing the Xserve is that the company has added a new standard configuration to its Mac Pro lineup. The new "Server" configuration offers an entry-level 2.8 GHz quad-core processor with 8 GB of RAM, two 1 TB hard drives, and Mac OS X Server for $2999.

The specs on the Mac Pro Server configuration can be boosted with a full range of build-to-order options, including processor options up to dual 2.93 GHz six-core Westmere chips, up to 32 GB of RAM, additional hard drives, a second optical drive, RAID card, Fibre Channel PCI Express card, and Xsan storage area network software.

While Apple's "non-server" Mac Pro options could (and still can) be configured with Mac OS X Server, the new Server configuration offers an optimized starting point for building a machine to focus on server tasks rather than act as a workstation.