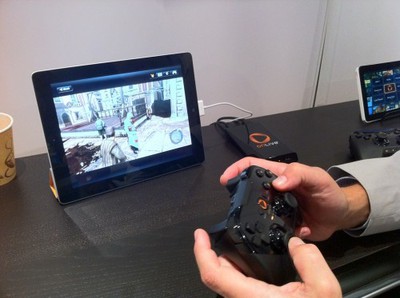 At E3 this week, OnLive announced the coming of an iPad client App for the OnLive gaming service.

We previously covered OnLive demoing this as a "tech demo" but it seems they've progressed to a final product. OnLive has already delivered a viewer app so iPad users can watch live games. Today's announcement, however, extends that to actual gameplay from your iPad.

OnLive delivers console-quality games to Macs, PCs, your TV (and now your iPad) by remotely streaming the game from their central servers. The customer's home computer need not be fast enough to render high resolution graphics -- instead it simply has to play back what amounts to a video stream of the game, while user controls are sent back to the central server.

We spoke to TouchArcade's Eli Hodapp who had a chance to demo the new system which he said worked "amazingly well". The OnLive iPad client will offer a visual overlay so customers can control games using on-screen touch controls to replace the usual physical controller. They also are giving developers the opportunity to implement actual touch/swipe controls as seen in the video above. Finally, OnLive will be offering a physical game controller (photo above) that communicates directly to the iPad through wireless bluetooth. The physical controller is optional but significantly improves the gaming experience. Hodapp described the entire package as a "game changer". OnLive has not yet announced pricing for the optional controller, and had no comment about an iPhone version in the future.

This app seems like it would be find perfect usage for iOS 5's new AirPlay mirroring that would allow you to display the game on your HDTV.

gorgeousninja
Well contrary to the doom-mongers and naysayers...this looks (in theory).. fantastic.
Score: 3 Votes (Like | Disagree)

WTH? That would be awful!
Score: 3 Votes (Like | Disagree)

KylePowers
I think Apple just needs to come up with a first party controller solution.

I realize they hate buttons, but with all the good games out (and only getting better) and external display options (wired, wireless), I think a sleek controller is the next logical step. It's really only the last thing that separates an iPad from a 360/PS3 (to an extent, of course).
Score: 2 Votes (Like | Disagree)

cRuNcHiE
Considering the lag I get from using vnc to my pc over local wifi, I can't see this being any use surely
Score: 2 Votes (Like | Disagree)

fswmacguy
Wouldn't this service require a very high fidelity connection? I couldn't imagine playing something like this on DSL. Seems like users would need a very fast connection at all times.
Score: 1 Votes (Like | Disagree)
Read All Comments

Sunday August 1, 2021 6:21 am PDT by Sami Fathi
Models of the Apple Watch Series 6 with titanium cases part of the "Apple Watch Edition" collection is currently widely unavailable for pick-up in several of Apple's retail stores in the United States and is unavailable entirely for delivery in major markets. Noted by Bloomberg's Mark Gurman in the latest edition of his "Power On" newsletter, titanium models of the Apple Watch Series 6,...
Read Full Article • 142 comments