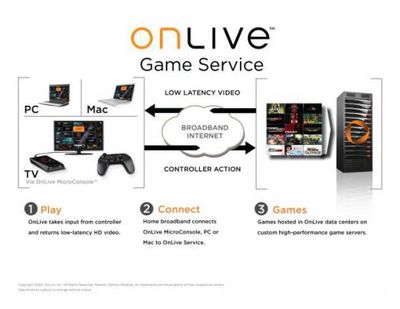 A company called OnLive has been making headlines since 2009 when it first announced its streaming video-game service. OnLive promises to deliver console-quality games to Macs, PCs and your TV by remotely streaming the game from their central servers. The customer's home computer need not be fast enough to render high resolution graphics -- instead it simply has to play back what amounts to a video stream of the game, while user controls are sent back to the central server. OnLive promises instant access to major titles with no installs or downloads required. OnLive is said to be launching today with an initial lineup of 23 games.

OnLive has also been showing off a tech demo of the service on an iPad. They demoed it at D8 and TouchArcade managed to get video of it running PC/Xbox360 game Borderlands at E3 2010.

Because of its raw tech demo state, the controls are less than ideal. The client uses a weird virtual joystick button layout that I don't really think would be very useful for anything outside of just demonstrating what is possible. The following video walks through the OnLive iPad client, and shows Borderlands running, an XBOX and PC game. Also, after that, we load up Dragon Age: Origins, which didn't work because it didn't have gamepad controls, and finally we spectated on some games in session by other OnLive members.


Unfortunately, OnLive has made no promises about actually releasing an iPad client for their service, but makes for an eye-catching demo. OnLive even demoed Crysis running on an iPhone back in 2009.
[ 66 comments ]