While Apple's new iCloud service doesn't fully launch until the fall alongside iOS 5, the company has already rolled out a few small portions of the service to existing users. Among the additions are automatic downloads and listings of purchased content for easy redownloading. 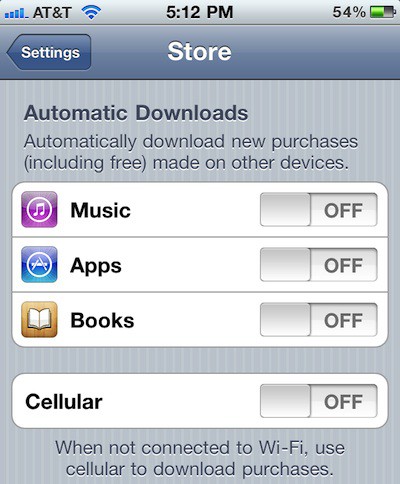 Automatic downloads allow users to set preferences to have newly-purchased content such as music, apps, and books automatically pushed to other devices. Users have individual control over the three different media types and can also specify whether or not content pushing should be limited to Wi-Fi connections only in order to save cellular bandwidth. Settings are available within the "Store" menu of the Settings application in iOS 4.3.

Facilitating the re-download of previously purchased content are new "Purchased" listings found in the iTunes, App Store, and iBooks applications for iOS devices. The new listings provide users with easy access to listings of all items purchased on a given Apple ID, whether or not that content is currently on the device. Users can then easily obtain the previously-purchased content not currently installed.

Apple is also in the process of releasing iTunes 10.3 for Mac OS X and Windows, an update that should bring the new iCloud capabilities to the Mac side of things. The new version is being advertised on Apple's iTunes site, but the actual download page is still showing iTunes 10.2.2 and Software Update is not yet offering the new version.

I hate to sound like a troll, but it's annoying to me that we still don't have the new airplay stuff or any other new features from 4.3. And now we won't get these updates either until who knows when.


That's not trolling...it's a legit complaint.
Score: 7 Votes (Like | Disagree)

rorschach
Being able to browse apps you've purchased but haven't installed is nice. As is being able to re-download music. And hey, it's free.
Score: 6 Votes (Like | Disagree)

This is great. So, when does the Verizon iPhone get 4.3? We're still waiting on features introduced a few months back.

Man...the Verizon iPhone is not even the same device as the AT&T version. Sucks for those of us who are with VZW.
Score: 5 Votes (Like | Disagree)

smiddlehurst
Hmm, Apps and Books available but no music... I assume the UK is going to have to wait on that for a while longer? Ah well, not a big deal or unexpected and maybe it'll be there in time for iOS 5 launch in the autumn.
Score: 4 Votes (Like | Disagree)

Being able to browse apps you've purchased but haven't installed is nice. As is being able to re-download music. And hey, it's free.


Would be nice if I could 'remove' those from the list that I will never ever care about again (because they were too bad)
Score: 3 Votes (Like | Disagree)
Read All Comments

Wednesday June 9, 2021 8:23 am PDT by Joe Rossignol
While there are many great new features in macOS Monterey, several of them are not available on Intel-based Macs, according to Apple. On the macOS Monterey features page, fine print indicates that the following features require a Mac with the M1 chip, including any MacBook Air, 13-inch MacBook Pro, Mac mini, and iMac model released since November 2020:Portrait Mode blurred backgrounds in...
Read Full Article • 767 comments