Manipulation of Apple's Stock Price Evident in the Options Market? 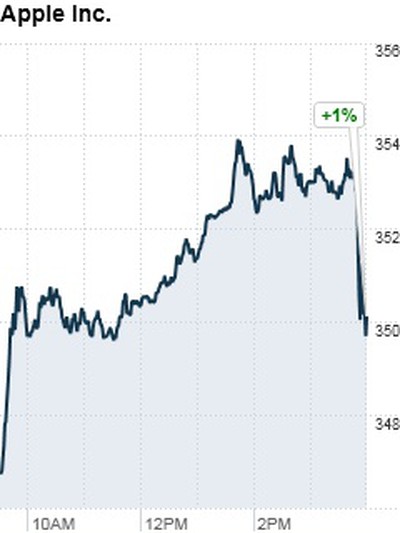 Apple's stock price drop in the closing minutes of trading on April 29th
Fortune reports on an interesting phenomenon being observed in Apple's stock price related to the weekly options market, the trading of rights to purchase stock at a given price at the end of a specified period. According to the report, Apple's stock is consistently seeing suspicious price changes on Fridays as those options are set to expire, activity that makes a significant of traders lose any potential gains as the stock price moves to meet the strike price for that week's options. In many cases, that activity serves to depress the overall stock price, thereby also negatively impacting regular traders as well.

Then, in an extraordinary burst of trading -- exacerbated by the rebalancing of the NASDAQ-100 scheduled for the following Monday -- more than 15 million shares changed hands and the stock dropped below the $350 strike price just before the closing bell. Result: The value of those calls disappeared like a puff of smoke.

Fortune went back and charted the daily closing prices for Apple stock over the past eight weeks, comparing the Friday closes to the "max pain" price at which options on both sides of the equation (puts and calls) have the least value in aggregate. Throughout the time period, Apple's stock consistently moved toward the max pain point on each Friday, sometimes over a period of only minutes as trading came to a close for the week.

While the phenomenon is not new and not unique to Apple, the reasons for it are not entirely clear. Some have argued that normal hedging activity is responsible for the drifts in stock price, but scientific studies have shown that such stock price behavior would not be accounted for by simple hedging and is thus indicative of stock price manipulation, which is illegal under U.S. securities law.

Apple is obviously one of the most closely watched stocks these days, and with the second-largest market capitalization in the U.S. markets has the potential to significantly influence trading. And so an apparently consistent manipulation of Apple's stock price makes for an interesting story, even if it is not yet clear who is responsible for the activity and how it is being accomplished.

Not the Options thing. Not again... :rolleyes:

Oh, Apple, learn how to play nicely in the Stock Market.

What are you talking about? If you didn't read the article why comment?

It's about stock traders manipulating the market. Not Apple "playing nicely."
Score: 14 Votes (Like | Disagree)

houdinize
so I understand maybe three words of that.
Score: 10 Votes (Like | Disagree)

Eddyisgreat
Wait a minute so you're telling me those really high speed servers owned by private financial companies who are conveniently colocated in same data center as the NYSE ARE being used to game the system? who woulda thunk!?
Score: 10 Votes (Like | Disagree)

LagunaSol
What happened to long-term investing in companies you believe in?

The market manipulating dirtbags in the minute-by-minute trading game make it difficult for those of us investing the old-fashioned (honest) way. :mad:
Score: 8 Votes (Like | Disagree)

jtara
This is pretty nonsensical. Fortune should know better. This is a natural phenomena of option pricing. Of COURSE the market is going to drive the stock to the price where the maximum number of options will expire worthless.

Traders (as opposed to those using options for legitimate hedging reasons) don't want to hold options to expiration. If a near-the-money call option is looking like it is going to expire with a value of, say, $1, then the holder of those options is going to sell them. Ultimately, they are going to be involved in a conversion, where the buyer exercises the call (acquiring the stock at the fixed, option price) and then immediately sells the stock. Of course this sale is going to help depress the stock price.

Expiring puts that are in the money are going to help force the stock price up.

The two opposing forces will try to force the stock price to the "max pain" price, which will depend of the overall balance of open calls/puts.

It's normal *trading* activity, not normal *hedging* activity that is going to force the price to max pain. Hedgers hold options to expiration. Traders don't. The extent to which max pain comes into play will in part be determined by how many options are held by traders as opposed to hedgers.
Score: 5 Votes (Like | Disagree)

This alone would fully explain the behavior of the stock price.


Only for 1 of the 8 days analyzed. When something happens too many times in a row, the odds that it is some random effect get much smaller.
Score: 5 Votes (Like | Disagree)
Read All Comments