'Dramatic' Growth in Digital Music Sales Due to The Beatles on iTunes? 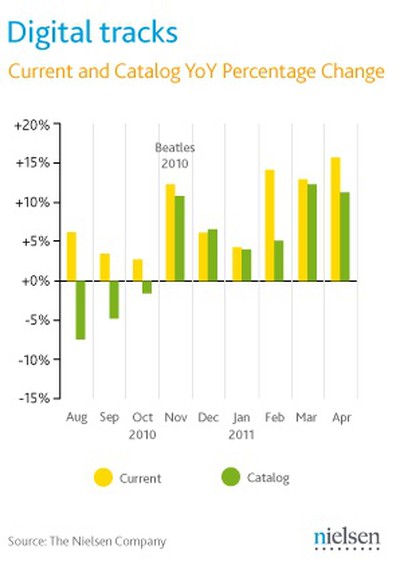 Media research firm Nielsen yesterday revealed that overall music sales in the United States are up 1.6% year-over-year so far in 2011, driven in large part by a 12.4% surge in digital music sales that appears to coincide with the debut of The Beatles on iTunes last November.

While physical albums saw a decline in year-over-year sales from the same period in 2010, digital album and track purchases went up 16.8 percent and 9.6 percent, respectively. Digital retailers received more than half of all music transactions, propelling a 12.4 percent growth in sales over last year.

Catalog album sales are up 5.4 percent in 2011, thanks in part to a long-awaited 2010 deal allowing digital distribution of The Beatles’ albums for the first time.

As noted by All Things Digital, however, it seems hard to believe that The Beatles are responsible for the continued bump in digital sales still being seen six months after the group's iTunes debut. Regardless, music executives are undoubtedly happy that music sales are at least holding steady after what has been an extended decline in overall sales and a flattening out of digital sales, although it will obviously take some time to determine if this is a true shift in sales momentum or simply a brief respite.

PeterQVenkman
When were 90 second samples introduced? That made the biggest difference to me.

Yep. The Beatles are THAT awesome. :D

Perhaps with the beatles on itunes it encouraged people to download music from there for the first time (like maybe older people), who then went on to download other music on there which helped the figures?


Exactly. They looked into the store to buy their Beatles tunes, and then realized "Holy Hell! Everything I EVER liked is here!" and the rest is history. Also, there actually HAS been some catchy music coming out that is about more than angst, guns, and hos, so people are willing to actually pay.
Score: 3 Votes (Like | Disagree)

Oh no, not this Beatle hoo-haw again.

I only know one person (out of 40 or 50 friends) who actually listen to that band. No one else listens. I think they have about the same number of people who like them that like Henry Mancini. On the other hand I know tons of people who love Pink Floyd, Led Zeppelin, Rolling Stones, Genesis, etc. Flab Four are overrated, at best.

On a personal note, just hearing Beatle's music is depressing. And I'd rather be water-boarded than listen to it. I also don't like Frankie Avalon and Annette Funicello.


Just because you don't know anyone who listens to them doesn't mean that they are overrated, or bad, or nobody is buying their stuff on iTunes.

I don't know anyone who actually listens to Genesis (and if I did, I certainly wouldn't admit it). Does that mean they are completely irrelevant? Nope. It means that there are people who have different taste in music than I do.

I personally don't listen to the Beatles, but my parents certainly jumped on board and downloaded everything that was available. My mom is a technophobe and found it much easier to just download everything onto her iPad than to dig out the old CD's and rip them into iTunes. I imagine there are hundreds of thousands just like her. I mean, somebody was buying them.
Score: 2 Votes (Like | Disagree)

mknopp
Wait! Aren't the record companies going to blame this sales trend on the pirates? After all, they blamed every other trend in sales on the pirates.
Score: 2 Votes (Like | Disagree)

Exactly. They looked into the store to buy their Beatles tunes, and then realized "Holy Hell! Everything I EVER liked is here!" and the rest is history. Also, there actually HAS been some catchy music coming out that is about more than angst, guns, and hos, so people are willing to actually pay.


Yea, this is what I think happened as well. Once people got the hook into the iTunes store, like you said, the rest is history.
Score: 2 Votes (Like | Disagree)
Read All Comments