While much of the attention regarding the long-delayed launch of the white iPhone 4 has died down, a few tidbits of interest continue to trickle out.

Late last week, Japanese blog Mac Otakara pointed to a pair of tweets from @kazunie highlighting some of the differences between the black and white models of the iPhone 4. 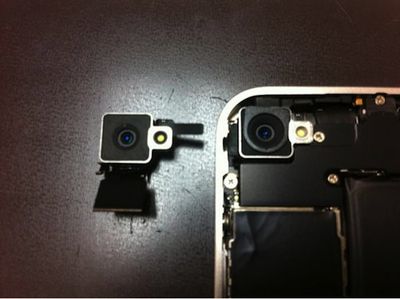 Rear camera of black (left) and white (right) iPhone 4
In particular, Apple seems to have modified the camera sensor in the white version, opting for a slightly different module that likely carries almost identical specs to the one used in the black version. It is unclear, however, whether the change was made specifically to deal with issues related to light leakage reportedly affecting camera performance, one of the more popular targets of rumors regarding the device's delayed launch.

The report also notes that the proximity sensor has been modified in the white models, although no details on the changes are included. The proximity sensor has been one of the chief areas of focus on the device, given Apple's obvious redesign of the iPhone's front plate in the area of the sensor, shifting from a grille of tiny holes in early renderings and samples of the white models to a single black window in the shipping versions.

Reports of the white iPhone 4 being slightly thicker than the black version are also coming under fire, with Apple marketing chief Phil Schiller reportedly sending a response to a customer via Twitter direct message disputing the claims.

It is not thicker, don't believe all the junk that you read

Consumer Reports has also disputed the findings with their own caliper measurements showing identical thicknesses for the black and white models.

Consumer Reports' caliper measurements of iPhone 4 thickness
The thickness difference was of course confirmed in an extensive series of caliper measurements taken by TiPb last week and by numerous other users examining their own devices and attempting to fit them into cases. Consequently, the difference may be an issue of quality control with some phones exhibiting the difference while others do not, rather than an intentional design change to specify the thicker profile.

BC2009
I think that no other company has their products come under more scrutiny than Apple. It is amazing. When folks say how the media just falls over Apple and praises them constantly -- it cracks me up. The media is just itching for bad news on Apple, and they are looking in every possible place to find it.

What shocks me is the level of forgiveness that competing tablets against the iPad are getting. Apple is so dominating the tablet-computing sector right now, that the media is just hoping for a contender. Motorola and RIM have both released "Beta Hardware (http://technologizer.com/2011/04/21/the-era-of-beta-hardware/)" to the public and many reviewers are being soft on RIM with even more being soft on Motorola. If Apple released such a product they would get blasted in the media with nobody offering forgiveness.

Case and point... Mossberg on the iPad 2:

"Also, the battery life, while very good, isnt as strong as I found it to be on the first iPad. In my tough battery test, where I played full-length movies until the battery died, with the screen brightness at about 75% and both Wi-Fi and cellular radios running, the iPad 2 just barely exceeded Apples claimed battery life, dying after 10 hours and nine minutes."


Keep in mind that Apple advertises 10 hours and Mossberg got better than that with the brightness setting 25% higher than Apple's default setting. Yet he had to reach to find something to complain about (e.g.: his iPad 1 test unit just happened to have extraordinary battery life -- keep in mind that most reviewers of iPad 2 got better battery life than iPad 1).

Gruber criticizes Mossberg even more in a post called "Bending Over Backwards" (http://daringfireball.net/2011/03/bending_over_backwards). Some of Gruber's points are arguable, but I think he is dead-on in many regards, especially his final quote:

"Stating the plain truth, that the iPad 2 has no serious competition as a mainstream consumer device, doesnt make you biased. It makes you accurate."


Apple, however, does not get to enjoy the luxury of forgiveness that the media affords to those who are not the market leader. The fact that folks are trying to quantify a thickness difference of 0.2 mm on some units, completely amazes me. I'm sure its within manufacturing specifications and I'm sure that not every single Black iPhone 4 is the same thickness, and yet it is news.
Score: 12 Votes (Like | Disagree)

What is your point? If you have something to say, then say it, don't post useless links.

It's called sarcasm - some get it and some don't.

Ill explain what the link implied. The sarcastic joke that you posted is simply trite beyond belief, and as such I thought Id use similar methods of sarcasm to convey my thoughts on the matter. Now, the crux of my joke relies on the play of opposites (as your comment was anything but original) and meant to be informative. Im really sorry you didn't get my initial brevity, and Ill make sure to explain myself in full next time. Thanks so much, stay well:)
Score: 9 Votes (Like | Disagree)

It's just that black is slimming. ;) 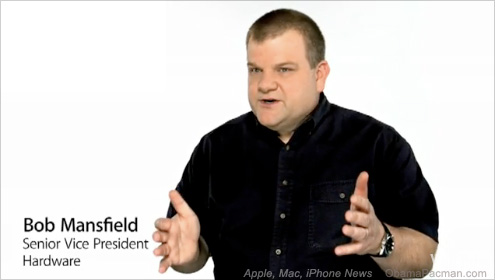 Vertigo50
It's amazing what someone with the proper tool can do to actually test these kind of issues.

I was waiting for someone to FINALLY grab a caliper and measure both devices. Game over.
Score: 6 Votes (Like | Disagree)

NinjaHERO
It's just that black is slimming. ;)
Score: 5 Votes (Like | Disagree)
Read All Comments