As part of its comments on the recent iOS location-tracking controversy, Apple acknowledged several bugs in the mobile operating system that have led to more data than originally intended being stored on devices and caused data to be stored even when Location Services are disabled. The company reported that the issues would be addressed in a software update to be addressed "sometime in the next few weeks". 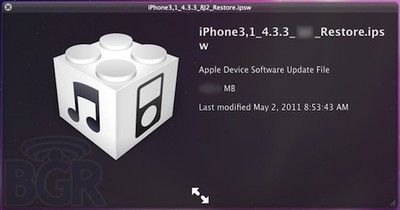 BGR now reports that that update is indeed on the way, in the form of iOS 4.3.3.

We've been sent the OS and while we haven't loaded it on our iPhone just yet, here is what we have been told it will address:

An exact timeframe for a release of iOS 4.3.3 is not known, but BGR has been provided with advance access to the last several iOS releases, and the site's reports on them have generally come not more than a week prior to the public release.

wordoflife
I kinda liked the fact i could look at where I've been with my phone.

I can see how this update will have "battery life improvements" now that the phone is not going to be tracking our movements 24/7 even when all location services are shut off.

The phone tracked movements through cell towers, not GPS. And your phone is always connected to cell towers anyways so nothing is changing in terms of battery life. Also, nothing is really changing in this update except the fact that you won't be able to access the location file.
Score: 8 Votes (Like | Disagree)

I find it hilarious that Steve Jobs claimed Apple was not tracking users, but now all of a sudden we find Location tracking being completely removed from this version of iOS, that is honestly something that annoyes me..


I find it hilarious that you don't understand what is being done here!
Score: 6 Votes (Like | Disagree)

As a software developer, the explanation that Apple gave seems far more plausible than "they are tracking your every move".

It makes total sense to keep a cache of cell tower positions to speed up positioning through trilateration (http://en.wikipedia.org/wiki/Trilateration). It also makes sense for Apple to maintain this as a crowd-sourced database and download part of it to your phone. Further, it makes sense for a developer to make an arbitrary decision to say "let's make the cache size 2MB -- that's smaller than a single song". Finally, it makes sense for QA to miss this since the file is not readily visible through the user interface. A very good article on this is here (http://www.macworld.com/article/159528/2011/04/how_iphone_location_works.html).

I for one cannot remember a single iAd ever popping that was more appropriate based on my location (e.g.: a restaurant ad showing up when I was near a location for that restaurant chain). I seriously doubt that Apple cares where I have been for the past year -- especially with the huge degree of error that trilateration offers. But they definitely care about the crowd-sourced data to understand what regions iPhones are being used most heavily.

Certainly, if Apple wanted to record my personal position it would make MUCH MUCH MUCH more sense for their servers to simply record the query my phone makes to obtain the portion of the crowd-sourced database that my phone wants to cache. That query could easily include a more exact GPS position (i.e.: give me the part of the cache near this location). It could also include a phone identifier. Of course, a timestamp could be associated with the query. They could keep the information on their own servers where I would NEVER EVER see it and they could easily access it. Keeping it on my phone simply does not make sense if Apple really wanted this information -- it makes it easy for me to find and it is of less use to Apple that way.

I wonder if Google records my Wifi/GPS location on Google Maps or what locations I searched when using Google Maps. Hopefully, my identity is anonymized before the query is sent to Google for what part of the Maps database to pull down and cache. But again, it would be really easy for anybody to do this on the server side.
Score: 4 Votes (Like | Disagree)

Since the 3G is considered end of life, no. I also believe that the 3G doesn't have GPS, just used triangulation solely.


iPhone 3G has GPS, and it has the same "problem" with location tracking as this update addresses.
Score: 4 Votes (Like | Disagree)

hobo.hopkins
I should hope that this update will allay any of the concerns and fears that some panic-stricken people have had lately.
Score: 4 Votes (Like | Disagree)
Read All Comments