Sandy Bridge iMacs Due Next Week 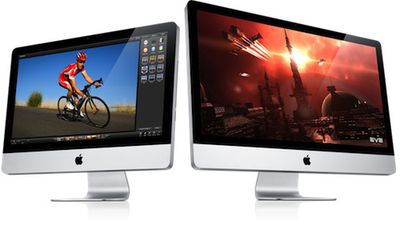 AppleInsider confirms the early reports that iMacs are due to be refreshed this week.

More specifically, people familiar with the matter say Apple plans to introduce the new models on Tuesday, May 3, swapping out the systems' first-gen Core i processors and miniDisplay ports for second-generation Core i chips and the company's new high-speed Thunderbolt port.

May 3rd is believed to be scheduled as a day for promotional materials at Apple stores to be changed out, likely marking the release of a new product.

Apple is widely expected to adopt Thunderbolt across their product line from here on out. They first introduced Thunderbolt on the MacBook Pros released in February. Thunderbolt promises a faster connector technology to drive external displays, hard drives and more.


Anger management is a good thing.
Score: 9 Votes (Like | Disagree)

GFLPraxis
Great, now can someone please release a product that actually uses Thunderbolt so I can get it for my MBP?
Score: 9 Votes (Like | Disagree)

One step closer to the MacBook Air update.

I swear, this guy never seems happy about anything. I seem to recall him saying this for other product releases... $10 says he'll say it again once the MBA is released.
Score: 7 Votes (Like | Disagree)

You are also stuck in current times. Physical media will be dead by then, everything is going to be cloud based, there will be no such thing as a physical copy of movies any more :)


tell that to the majority of the people in the world who struggle to stream a SD youtube video because internet speeds aren't up to snuff yet. we simply don't have the infrastructure for it yet.
Score: 6 Votes (Like | Disagree)

You are also stuck in current times. Physical media will be dead by then, everything is going to be cloud based, there will be no such thing as a physical copy of movies any more :)