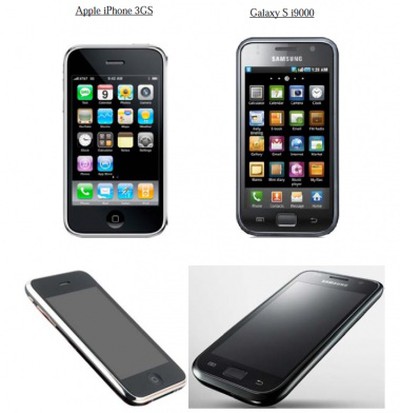 Images from lawsuit
Yesterday, Apple filed suit against Samsung over their "Galaxy" line of Android-based smartphones and tablets. In a statement, Apple claimed that Samsung copied Apple's technology and user interfaces:

"Rather than innovate and develop its own technology and a unique Samsung style for its smartphone products and computer tablets, Samsung chose to copy Apple's technology, user interface and innovative style in these infringing products," the Journal quoted Apple's complaint as saying.

As many have noted, Apple also happens to be one of Samsung's biggest customers. Apple uses Samsung displays and semiconductors extensively in their iOS devices. Even so, Samsung says they will respond "strongly":

"Apple is one of our key buyers of semiconductors and display panels. However, we have no choice but respond strongly this time," an unidentified official was quoted as saying.

According to the Yahoo news article, Apple was Samsung's second-largest client in 2010 after Sony Corp and was responsible for 4% of Samsung's $142 billion in revenue last year.

Now you're getting it!


Would you guys get a room already?

The logo on the center of the record, not the album artwork.


The logo on the center of the record is an apple sliced in half. Again, it looks nothing like Apple's logo.
Score: 1 Votes (Like | Disagree)


Where did anyone say that?

And as an aside, The Beatles Let It Be album had a red apple logo in the center instead of the usual green.


I thought that cover had photos of the Beatles on it?

And red or green, their logo still looks nothing like the Apple Computer logo.
Score: 1 Votes (Like | Disagree)

JGowan
Between Samsung on the hardware and Google on the software, I can't believe anyone in their right mind actually saying with a straight face that the Samsung phone in question is not stealing from Apple. Get a grip.
Score: 1 Votes (Like | Disagree)
Read All Comments

Monday May 17, 2021 6:06 am PDT by Joe Rossignol
Apple today announced that Apple Music will be gaining support for Spatial Audio with Dolby Atmos at no additional cost starting in June. At launch, Apple Music subscribers will have access to thousands of songs in Spatial Audio from artists like J Balvin, Gustavo Dudamel, Ariana Grande, Maroon 5, Kacey Musgraves, The Weeknd, and many others. Apple says this feature will provide a...
Read Full Article • 413 comments