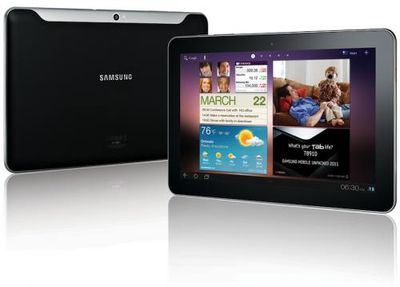 The Wall Street Journal reports that Apple has filed a patent lawsuit against Samsung, targeting the Korean company's "Galaxy" line of Android-based smartphones and tablets.

The lawsuit, filed on April 15 in the Northern District of California, alleged that Samsung's smartphones, such as the "Galaxy S 4G," "Epic 4G," "Nexus S" and its "Galaxy Tab" touchscreen tablet, violated Apple's intellectual property.

"Rather than innovate and develop its own technology and a unique Samsung style for its smart phone products and computer tablets, Samsung chose to copy Apple's technology, user interface and innovative style in these infringing products," the lawsuit said.

Samsung is one of Apple's chief suppliers for its own iOS-based devices, with Samsung manufacturing Apple's A4 and A5 systems-on-a-chip as well as LCD displays, flash memory, and other components.

Samsung is one the companies pushing ahead most aggressively in the tablet market to compete against Apple's iPad, having already released a 7-inch "Galaxy Tab" and announced larger 8.9-inch and 10.1-inch versions set to launch within the next few months. The company is of course also a major player in the Android-based smartphone market.

Update: All Things Digital has posted a few images from the lawsuit, a number of which show side-by-side comparisons between Apple's and Samsung's devices.

MickyDees
I guess I can see Apple's point. But, aren't all tablets going to have a similar style and interface? It would seem like there can be only marginal differences in a touch screen interface.
Score: 8 Votes (Like | Disagree)

The first of apple lawsuits seems to go against apple :

Lets hope apple puts a bit more effort into iOS 5 and the iphone 5 and not in inventing legal charges against its competitors.

Well, that would be a good story, except that you left out half the facts.

The real action there is the case of Nokia against Apple. Apple against Nokia is just an unimportant (to Apple) side show; equally unimportant are both parties' attempts to stop imports.

You dont design a phone in weeks

You don't design a phone in weeks, but it is quite easy to show something that looks quite similar to an iPhone only weeks after seeing an iPhone for the first time. Compare the times between the first model shown and the actual phone released: iPhone was shown in January, released in April. Samsung phone was shown in February, released in November. Nine months vs. three months. A very clear indication that Samsung's phone was nowhere near the level of completed development that the iPhone was.
Score: 2 Votes (Like | Disagree)

"Silly" being the operative word here.

Some of you guys really don't understand how important design is.

For instance, I have a very distinctive modern retro look car, but if a Chinese company were to copy it and start selling it, all hell would break lose. Companies don't invest large amounts of money designing something and then marketing it at huge cost, for someone to come along and copy the bits they like and chuck it out at much less cost.

Companies need protection from each other to stop designs and inventions being ripped off.

What is so difficult to understand about that?

So forget the question of whether the icon has square or round edges, Samsung are going to be shown as a company that respects no one, let alone Apple.

What would be interesting is whether anyone else files a similar suit, especially Nokia, now that Apple have got started.
Score: 2 Votes (Like | Disagree)

Yes, some Android device it have it. It has been previewed and even talked about in the Android community, as unimpressive as they are.
http://www.mobilecrunch.com/2011/03/15/netflix-for-android-app-hijacked-from-the-lg-revolution/


A stolen app that doesn't actually stream anything is not "having it."
Score: 2 Votes (Like | Disagree)

If you drive down the street you see millions of cars that look very much alike, but car makers don't waste time suing each other over style similarities because they can rely on the performance specifics of their cars, and the buyers will compare and choose what's best for them.

Apple must be very worried about the slew of tablets coming out and it knows that its window of dominance is closing.
They are afraid of the competition.

You are absolutely correct, Apple is indeed very afraid of the competition.

They are deathly afraid of Android, for it they weren't, their legions of followers would not post the thousands of posts on this forum, bashing anything and everything about Android.

If Android was to go away tomorrow, they would go into shock, and be desperately seeking something else to take out their anger and issues on.

Fan-boys and Apple apologists are standing behind them with every excuse in the book, and at the end of the day they all relish the chaos.

Apple loves headlines, their users money, the power and control they have cultivated over the New York Times, and the legions of non thinking drones that worship Steve.
Score: 1 Votes (Like | Disagree)

Carmakers sue each other all the time, for things as silly as the number of slits in the front grill.

And Jeep lost, partly because even though many people did show confusion between the two brands, the actual buyers themselves did not.

Of course, it also helped that the court ruled that GM had no intention of causing confusion. Not sure that Samsung would get away with that.
Score: 1 Votes (Like | Disagree)
Read All Comments