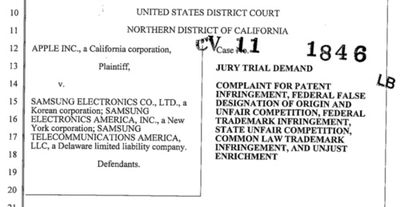 Former Engadget editor Nilay Patel lays out a thorough analysis of Apple's newly-filed lawsuit targeting Samsung for allegedly copying the "look and feel" of iOS devices with its "Galaxy" line of smartphones and tablets. Patel offers an excellent look at the overall lawsuit, as well as a claim-by-claim analysis of each of Apple's sixteen claims against Samsung.

Taken as a group, it feels like a remarkably solid case - Samsung can't just up and countersue Apple with its own patents and hope to walk away with a handshake and a cross-license because of the various trademark, trade dress, and design patent claims. How the company decides to deal with those issues remains to be seen; there's no question in my mind that Samsung designed TouchWiz to look and feel as much like iOS as possible, and then marketed it as such.

The entire report is a solid read for those looking to understand more about how Apple is approaching the issue.

Interestingly, the background portion of the lawsuit also provides total sales numbers for various iOS devices "as of March 2011". Comparing those numbers to known sales as of the end of 2010, asymco's Horace Dediu has calculated minimum unit shipments for the various devices during the first quarter of 2011.

In the lawsuit, Apple variously notes that either "as of" or "by" March 2011, Apple had sold more than 108 million iPhones, over 60 million iPod touches, and over 19 million iPads.

These numbers are material because we know units sold prior to CQ1 and can derive the minimum units sold for these three product lines during Q1.

The question becomes whether the implied level of 4.2 million iPads sold during the first quarter of 2011 is an accurate number, in which case Apple's performance would have fallen well below expectations, or simply an understatement by the company.

Apple is set to announce official figures for the quarter at its earnings release tomorrow. The release should include specific sales figures for the iPhone and iPad, but Apple generally does not issue specific numbers for the iPod touch, instead reporting total sales for all iPod models and then sometimes breaking out a rough share for the iPod touch or stating the device's growth as a means of highlighting its performance on the earnings conference call.

Are you aware that Apple copied the ibooks GUI from another software vendor? I remember seeing it years (like in G4 era) before ipad was out, before iBook. It was for keeping inventory of books on a mac.

I'm not gonna bother going looking for the link/screen shot but trust me, that look was used by another software vendor, BEFORE apple used it. And of course that's one reason this wasn't mentioned in the suit I'm assuming.

Edit:
Actually here it is.


Won apple design award in 2005. And when was iBooks introduced?


And the co-creator of that product is a UI Designer working on the iPad. Nice work.
Score: 1 Votes (Like | Disagree)

Sigh, you're entirely missing the point of this case. No one's arguing that there's been a grid of icons before, it's just that Samsung went the extra step. See, Android itself doesn't have a near-identical desktop, but TouchWiz does. TouchWiz is what you see here, the icons have been made into squares (like the iPhone), there's now a Dock with frequently used apps with a grey background to distinguish it (like the iPhone), it has a black background (meh) but it uses white dots to note the page it's on (like the iPhone). They went the extra mile to provide an iPhone-like experience for their Android devices.

Yes. People here are failing to understand the difference between traditional patents that we usually hear about here, and design patents. I believe what Apple is suing over is infringed design patents. That the Galaxy S has a icon grid method for selecting applications is irrelevant in that case. They tried to copy the general design and likeness of the iPhone, which is against the design patents.

Also, whoever it was arguing it previously... Let's not trot out the whole "Apple lost the 'look and feel' argument against Microsoft" thing. That was a different case. Design patents still get filed and granted all the time. This is a new case.
Score: 1 Votes (Like | Disagree)
Read All Comments