With Apple's iPad 2 having been on sale in the U.S. for a week and half already and set to launch in 25 new countries on Friday, other companies are continuing to ramp up their efforts as they seek to bring competitive tablets to the market. 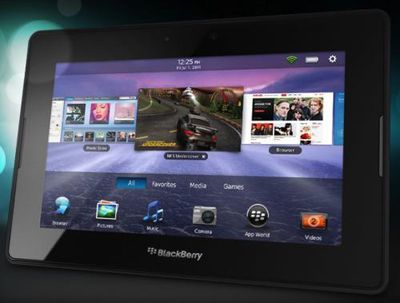 Research in Motion's BlackBerry PlayBook
Research in Motion today announced that it has partnered with Best Buy to begin taking orders for Wi-Fi models of the BlackBerry PlayBook, a 7-inch tablet primarily targeted at business users and set to launch on April 19th. Pricing for the Wi-Fi PlayBook will match that of the larger iPad 2 at $499 for the 16 GB model, $599 for the 32 GB model, and $699 for the 64 GB model.

"Tablets are becoming a bigger part of our business everyday and the launch of the BlackBerry PlayBook will heighten the level of excitement in this category," said Scott Anderson, head of merchandising for Best Buy Mobile. "RIM has a tremendous history of producing great mobility products for our customers and we are excited to help launch the BlackBerry PlayBook."

Not to be outdone, Samsung today announced new 8.9-inch and 10.1-inch versions of its Galaxy Tab device that will join the existing 7-inch tablet in running Android.

Samsung Galaxy Tab 10.1
As suggested by an executive earlier this month, Samsung has in fact redesigned the Galaxy Tab 10.1 to respond to Apple's iPad 2, dropping the thickness from 10.9 mm to 8.6 mm, making the Galaxy Tab 0.2 mm thinner than the iPad 2. The reduced thickness apparently forced Samsung to shift the rear-facing camera from an 8-megapixel sensor to a 3-megapixel one, although even the lower-resolution camera exceeds that found in the iPad 2.

The Wi-Fi Galaxy Tab 8.9 will offer essentially identical specs to the larger model down to the same 1280x800 resolution display (although obviously smaller in size) and will launch in "early summer" at $469/$569 price points for 16 GB and 32 GB models.

Blackberry playbook = The IPad 2 killer - you heard it here first.

Look at the specs, their greater or equal to the iPad 2 with the exception of battery life.