Anandtech has determined the iPad GPU to be the PowerVR SGX543MP2, a more advanced dual-core version of the PowerVR GPU found in the original iPad and iPhone 4.

Architecturally the 543MP2 has more than twice the compute horsepower of the SGX 535 used in Apple's A4. Each shader pipeline can execute twice the number of instructions per clock as the SGX 535, and then there are four times as many pipes in an SGX 543MP2 as there are in a 535.

They found that the new graphics processor offered over 3-5x the speed in simple geometry tests over the original iPad.

Anadtech then used the GLBenchmark 2.0 to provide a broader range of testing and included the recently released Motorola Xoom tablet. They found that in this overall benchmark, the new iPad 2 ran at 5.4x the framerate of the original iPad and 3.7x the speed of the Xoom. 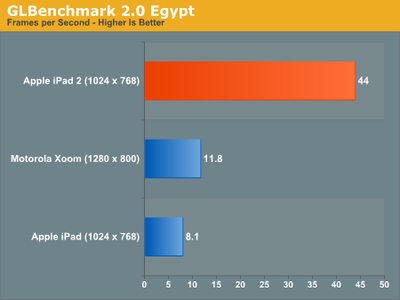 Other benchmarks showed improvements ranging from 3x-7x the speed of the original iPad. Ultimately, this will mean that developers will be able to offer significantly higher graphics quality and performance on the new iPad 2 over previous generation devices. We've already seen some early results in Infinity Blade, but the changes should become more dramatic as developers have time to sit down with the new devices. Of course, the iPad 2 represents a small percentage of iOS devices, but Apple is widely expected to integrate the same CPU/GPU into their upcoming iPhone 5 and future iPod Touch product lines.
Related Roundup: iPad
Buyer's Guide: iPad (Neutral)
Related Forum: iPad
[ 329 comments ]

DaveN
I want to know why someone would mark this as a 'negative'? Must be a Fandroid as an earlier poster mentioned.
Score: 1 Votes (Like | Disagree)
Read All Comments

Saturday June 19, 2021 6:00 am PDT by MacRumors Staff
The Apple news cycle started to move beyond WWDC this week, but that doesn't mean there still wasn't a lot to talk about, led by the official debut of the much-leaked Beats Studio Buds that might give us a hint of what to expect for the second-generation AirPods Pro. With no hardware announcements at WWDC, we also took a look at when we might finally see the long-rumored redesigned MacBook...
Read Full Article • 9 comments

Friday June 18, 2021 9:16 am PDT by Joe Rossignol
Apple this week stopped selling its Magic Keyboard with Numeric Keypad, Magic Mouse 2, and Magic Trackpad 2 accessories for the Mac in a Space Gray color, around three months after discontinuing the iMac Pro, which also came in Space Gray. Last month, Apple listed the Space Gray accessories as available while supplies last, and the company has now removed the product pages from its website...
Read Full Article • 120 comments

Friday June 18, 2021 6:59 am PDT by Sami Fathi
Apple supplier TSMC is preparing to produce 3nm chips in the second half of 2022, and in the coming months, the supplier will begin production of 4nm chips, according to a new report from DigiTimes. Apple had previously booked the initial capacity of TSMC's 4nm chip production for future Macs and more recently ordered TSMC to begin production of the A15 chip for the upcoming iPhone 13,...
Read Full Article • 140 comments