iMovie and GarageBand for iPad Go Live in App Store

Ahead of tomorrow's launch of the iPad 2, Apple has launched iMovie and GarageBand for the device, the two main apps featured during the iPad 2 launch event last week. Each app costs $4.99. 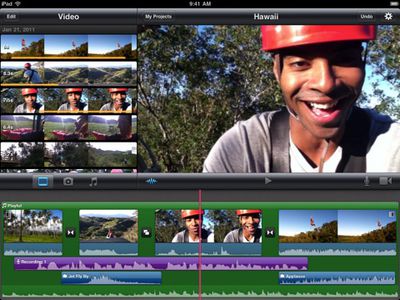 iMovie [App Store], comes as an update to the existing iPhone application, becoming a universal app compatible with the iPad 2, iPhone 4, and fourth-generation iPod touch.

GarageBand [App Store] is an iPad-only application compatible with both the first- and second-generation models.

GarageBand turns your iPad into a collection of Touch Instruments and a full-featured recording studio - so you can make music anywhere you go. Use Multi-Touch gestures to play pianos, organs, guitars, drums, and basses on your iPad. They sound and play like their counterparts, but let you do things you could never do on a real instrument. Enjoy a full range of Smart Instruments that make you sound like a pro - even if you've never played a note before. Plug an electric guitar into your iPad and play through classic amps and stompbox effects. Use the built-in microphone or a guitar to record, or capture any performance. Then mix up to eight tracks to create a song you can share.

For U.S. customers, Apple will begin taking orders for the iPad 2 in its online store at 1:00 AM tomorrow, with in-store availability set for 5:00 PM local time.