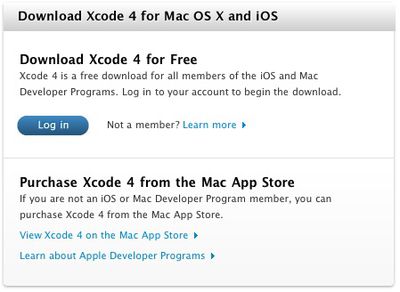 Apple today updated its Xcode information page to note that Xcode 4 is now officially available free of charge for all registered members of the company's iOS and Mac Developer Programs. Interestingly, it appears that non-members will have the option to purchase Xcode through the Mac App Store, although the listing does not yet appear to be active. Pricing appears to be set at $4.99 for non-members.

Xcode 4 has a streamlined new interface that integrates UI design, coding, testing, and debugging, all within a single window. The embedded Apple LLVM compiler underlines coding mistakes as you type, and is even smart enough to fix the problems for you automatically.

Apple gave developers the first glimpse at Xcode for at WWDC 2010 last June, and has released a number of updates to the software since that time. Apple seeded a golden master version of Xcode 4 in early February, and followed that up with a revised golden master alongside the iOS 4.3 golden master just last week.

Oh gosh, pull the other heartstring. These underprivileged kids of which you speak — presumably they already have Macs on which to program? Presumably they also have parents or carers with credit cards?

Be thankful you live in a country where you can earn that much in less time than it takes to type a lengthy complaint on MacRumours. The other half of the world isn't so lucky.

And now you're complaining about someone pulling a heartstring? WTF?

Grr… It's posts like yours that really tempt me to break certain forum rules relating to etiquette and language. But I shall restrain myself and explain things for you, since you're a 'newbie'…

The first comment uses something called sarcasm in reference to 'underprivileged kids'. If they have a Mac capable of running Xcode 4, they can certainly afford $5 (or else Mumsy can).

You see, there really is another world out there Blackheadr… where families live on a few dollars a day, and struggle just to survive. For some reason it just pisses me off to see spoilt white American teenagers crying poor because they can't get something for free. I've no idea why. :mad:
Score: 0 Votes (Like | Disagree)
Read All Comments

Online Apple Store Goes Down Ahead of 'Unleashed' Apple Event