Apple's patent applications have always been a topic of interest here at MacRumors. They give us a rare look into Apple's research and development labs, although many of the concepts never see the light of day.

For years, we've seen Apple patent applications for touch-sensitive keyboards. Those patents have been based on the pioneering work of FingerWorks, a company which was acquired by Apple in 2005 and served as the basis for much of Apple's multi-touch technology. Prior to the acquisition, FingerWorks had produced several touch-sensitive multi-touch keyboards that garnered positive reviews, although they never became mainstream products. The one major hurdle in the adoption of these touch-only keyboards has been the lack of tactile feedback as compared to traditional keyboards.

A new Apple patent application that we've uncovered seems, however, to try to address that issue by creating a hybrid physical keyboard that will also double as a motion-sensitive input device. The patent application is authored by John Elias, one of the co-founders of FingerWorks. 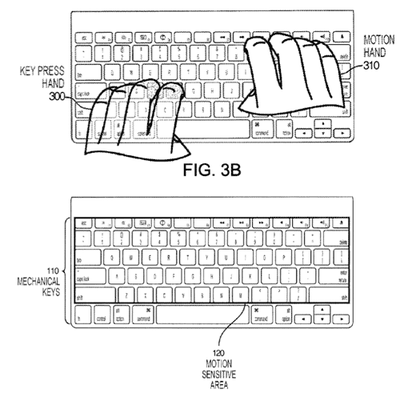 Over the last forty years there have been numerous attempts made to introduce an alternative to the standard keyboard. The changes include, but are not limited to, non-QWERTY layouts, concave and convex surfaces, capacitive keys, split designs, membrane keys, etc. However, although such alternative keyboards may provide improved usability or ergonomics, they have failed to replace or duplicate the commercial success of the conventional mechanical keyboard.

In the patent application, Apple goes on to describe a best-of-both-worlds scenario in which a physical keyboard also has a motion-sensitive area. The motion-sensitive area is implemented in this design with four "slot cameras" around the perimeter of the keyboard. These cameras are be able to track the user's finger movements immediately above the keyboard to provide the usual mouse or trackpad functions of cursor tracking and window scrolling.

Apple suggests that the keyboard would offer two modes: a typing mode and a mouse mode. These modes could be toggled by holding down a special key or through a specific key combination. Users could then operate the computer entirely using the keyboard for both typing and navigation. This configuration would eliminate the need for a mouse or even a trackpad. It's also easy to imagine the evolution to incorporate more complicated gestures beyond standard mouse navigation.

It's perhaps telling that, despite years of research, the most dramatic new input device Apple has released has simply been a standalone multi-touch trackpad. Keyboards relying solely on touch have not been considered ready for primetime quite yet, but it seems that Apple is shifting gears to explore more palatable variants.