During the build up to Leopard's release, we overlooked a very interesting patent application from Apple that appeared last week. This latest application is another product of Apple's Fingerworks acquisition from 2005. Fingerworks had commercialized versions of multi-touch interface input devices, such as this TouchStream keyboard. 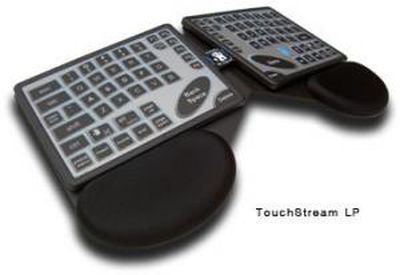 The TouchStream keyboard served a dual purpose, acting both as a keyboard as well as a multi-touch gesture surface.

While this design is space-efficient, the use of one surface to accomplish both typing and touch-sensing is less than ideal. Apple notes that traditionally, membrane or surface keyboards used raised ridges to denote key edges, however, this disrupts the surface when it is used as a touch device. Meanwhile, users have a hard time typing on a completely flat surface, so some form of key detection needs to be offered.

The solution they come up with is quite interesting. They go through the motions of describing other possibilities, including small bumps on the surface of the keys as well as a mechanical actuator system in which small bumps protrude at the corners of the keys when needed.

In the end, however, what they describe is a flexible surface which lays completely flat over the keys, and can be used as a smooth flat-surfaced touch-pad. When used as a keyboard, however, small bumps rise up under the flexible surface in each of the four corners of each key. This causes a tenting effect which provides a concave surface for each of the keys. By being tied to a mechanical system, the keys can effectively appear and disappear on demand. They even describe the software being able to tell when the keys are needed based on detecting typing motions (keyboard) vs swiping gestures (touch pad).