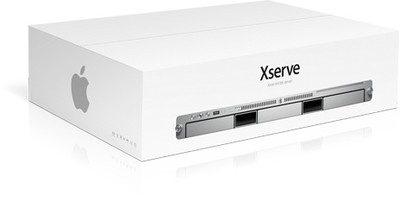 Apple's early November announcement that it will discontinue its Xserve line of rackmountable servers at the end of this month has caused turmoil among the product's fans, while Steve Jobs has suggested that poor sales were the reason for the decision. But in a follow-up report today, Hardmac claims that the Xserve discontinuation may only be the beginning of a move by Apple to pare down its storage- and server-focused offerings.

According to our sources, the discontinuation of the Xserve by Apple would be only the beginning of an overhaul, which would lead to the disappearance of some professional-orented activities.

Xsan and Final Cut server could be among the programs being discontinued, as Apple's management would be wondering whether to continue to develop and support them in the future.

Looking even further down the line, the report claims that Apple could opt to do away with its Mac OS X Server releases entirely, although the company is still expected to release a server version of Mac OS X Lion later this year.

Monday June 14, 2021 3:41 am PDT by Tim Hardwick
This year's Apple Watch Series 7 is likely to have thinner display bezels and use a new lamination technique that brings the display closer to the front cover, according to Bloomberg's Mark Gurman. From the report: The Cupertino, California-based tech giant is planning to refresh the line this year -- with a model likely dubbed the Apple Watch Series 7 -- by adding a faster processor,...
Read Full Article • 165 comments

Monday June 14, 2021 8:00 am PDT by Eric Slivka
We've seen a lot of teasers about the Beats Studio Buds over the past month since they first showed up in Apple's beta software updates, and today they're finally official. The Beats Studio Buds are available to order today in red, white, and black ahead of a June 24 ship date, and they're priced at $149.99. The Studio Buds are the first Beats-branded earbuds to truly compete with AirPods...
Read Full Article • 162 comments

Monday June 14, 2021 12:50 pm PDT by Juli Clover
Some M1 iMacs appear to have a manufacturing defect that causes the display to be mounted on the stand in a way that's not perfectly aligned, leading to a crooked display. YouTuber iPhonedo over the weekend published a review of the M1 iMac, and he found that his machine appeared to be tilted on one side, a mounting disparity that was visibly noticeable and proved with a ruler. Another...
Read Full Article • 181 comments