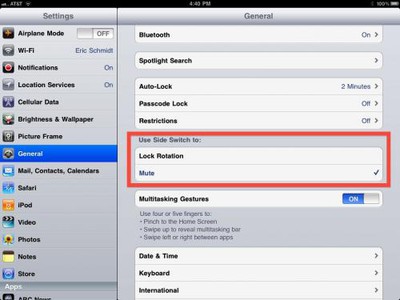 One of the more controversial changes made with the release of iOS 4.2 late last year was a change in the functionality of the switch on the side of the iPad, moving it from a screen rotation lock to a mute switch as seen on the iPhone. Apple CEO Steve Jobs had even reportedly responded to a customer question by noting that the change was permanent and that it would not be a user-configurable option.

Apple appears to have had a change of heart, as today's iOS 4.3 beta appears to have added an option in the device's Settings application to allow users to customize the behavior of the switch.

Wednesday July 1, 2020 10:48 am PDT by Juli Clover
Benchmarks for an unreleased iMac equipped with a 10th-generation Core i9 Intel Comet Lake-S chip and an AMD Radeon Pro 5300 graphics card have surfaced, giving us an idea of what we can expect from a refreshed 2020 iMac. The Geekbench benchmarks, which appear to be legit, were found on Twitter and shared this morning by Tom's Hardware. The iMac in the benchmarks would be a successor to the...
Read Full Article • 211 comments

Monday June 29, 2020 7:48 am PDT by Joe Rossignol
While the terms and conditions for Apple's new "Developer Transition Kit" forbid developers from running benchmarks on the modified Mac mini with an A12Z chip, it appears that results are beginning to surface anyhow. Image Credit: Radek Pietruszewski Geekbench results uploaded so far suggest that the A12Z-based Mac mini has average single-core and multi-core scores of 811 and 2,781...
Read Full Article • 412 comments