One of the major questions with the Mac App Store has been whether the same "race to the bottom" effect on pricing seen in the iOS App Store will carry over into the new Mac App Store. The pricing dynamic is even more interesting for the Mac App Store because it reflects a new distribution method for many long-standing Mac developers while also inviting over many developers who have experienced significant success with relatively low-price titles on the iOS side of things. 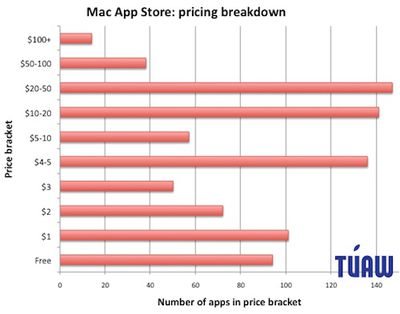 TUAW's analysis of pricing in the Mac App Store does in fact reveal a disparity, with two general groups: a low-priced group ranging from free to $5 that carries a heavy emphasis on iOS titles ported to the Mac platform and a higher-priced group operating primarily in a range of $10-$50 and weighted toward existing Mac applications taking advantage of the new distribution method.

As you can see, apps broadly fall into a few pricing categories. Almost half of the apps in the Mac App Store are in the cheap-and-free sub-$5 bracket; an informal survey reveals a lot of ports of iOS games falling into this area. There's then a bit of a no-mans-land between $5-10; then huge numbers of apps in the $10-50 brackets. Again, informally surveying the store, these appear to be mostly traditional Mac software packages that have been ported over to the store and broadly maintained their price points.

Finally, we have a small -- but significant -- number of apps above the $50 mark -- price points almost unheard of in the iOS App Store. It will be very interesting indeed to see how sales of these apps go, assuming any of the developers are willing to share that data.

With developers having for the most part set their initial prices without knowledge of what their competitors are doing, it will be interesting to see how the pricing dynamic plays out over time, particularly as the worlds of iOS developers and Mac developers become increasingly enmeshed.