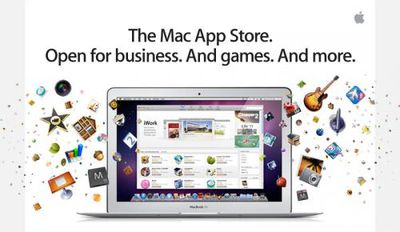 Apple today announced that the Mac App Store has opened for business with over 1,000 apps available at launch. The Mac App Store requires Mac OS X 10.6.6, which is now available for download via Software Update.

Apple today announced that the Mac App Store is now open for business with more than 1,000 free and paid apps. The Mac App Store brings the revolutionary App Store experience to the Mac, so you can find great new apps, buy them using your iTunes account, download and install them in just one step. The Mac App Store is available for Snow Leopard users through Software Update as part of Mac OS X v10.6.6.

"With more than 1,000 apps, the Mac App Store is off to a great start," said Steve Jobs, Apple's CEO. "We think users are going to love this innovative new way to discover and buy their favorite apps."

Among the Apple apps available through the store are iLife '11 applications priced at $14.99 each, iWork applications at $19.99 each, and Aperture 3 at $79.99. Apple also highlights the inclusion of applications from Autodesk, Ancestry.com and Boinx.

We'll have continuing coverage of Mac App Store developments as users have time to explore the store.