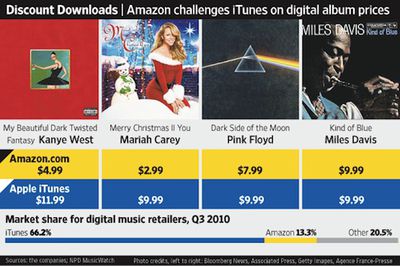 The Wall Street Journal takes a look at the digital music download market, demonstrating how Amazon's strategy of deep discounts on certain content has been unable to dent Apple's massive market share held through its iTunes Store. Rather than Amazon taking share from Apple, the two companies appear to be consolidating their leads over smaller competitors.

Amazon's share of the paid digital-download market rose to 13.3% in the third quarter, from 11% the year earlier, according to estimates from research firm NPD Group. Meanwhile, iTunes' share rose to 66.2%, from 63.2%.

Distribution executives at record labels say the disparity between the two may be even steeper, with Amazon commanding just 6% to 10% of the market in any given week, and Apple closer to 90%.

The report points to Amazon's strategy of specific deep discounts, such as offering a new Kid Rock album for only $3.99, as examples of successful promotions run by Amazon to entice customers, but on a day-to-day basis iTunes continues to serve as the place customers turn to for their digital music.

Amazon's deep discounts tend to come in two forms: bargain basement deals such as monthly promotions of $5 albums that generally involve the music industry cutting wholesale prices for Amazon in order to support the pricing, and "Daily Deals" such as the Kid Rock offer in which Amazon pays normal wholesale prices typically in the $7-8 range but charges customers only $3.99, taking a loss in hopes of drawing customers in for additional purchases. Amazon had partnered with certain labels for one-day exclusives on some Daily Deal content, but earlier this year Apple reportedly pressured the labels into reducing their participation in the program and Amazon backtracked on the exclusive offerings. In response, federal investigators launched an antitrust inquiry into the digital music industry, including an examination of Apple's efforts to keep labels from participating in Amazon's program.

Overall, the market for digital download tracks appears to be stagnating, with Billboard seeing only 0.3% growth so far in 2010 with over 1 billion tracks sold. Digital album sales, however, continue to boom, growing 13% this year as sales of physical CD albums have declined 20%.