Just a few weeks ago, Google announced the launch of Google Docs editing on the iPad and Android platforms via a lightweight mobile interface. Google had previewed the feature a few months earlier, and users had been anticipating the release as another reason to turn to the free web-based productivity platform. 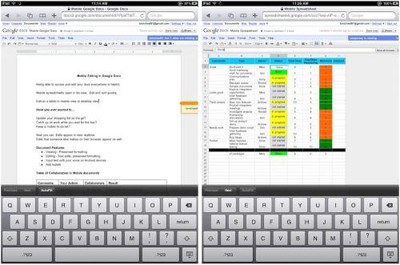 The new mobile editor is fast and lightweight, but sometimes you want to make more style edits like changing a font, or center aligning a paragraph. If you're on an iPad, you can do that by visiting the Desktop version of the document editor.

As noted in the announcement, Google views the mobile version of Google Docs as being the primary vehicle for documenting editing given its optimization for working on lower-powered mobile hardware, but the new iPad compatibility for the desktop version gives users the option for "one-off times" requiring more advanced edits.

Unfortunately, TUAW points out that the desktop Google Docs doesn't function perfectly on the iPad, with some features still being unsupported and some quirky behaviors that may frustrate users.