A pair of images showing claimed cases for the next-generation iPad have surfaced, with the images and accompanying information suggesting that the device may sport both a rear-facing camera and an SD card slot. 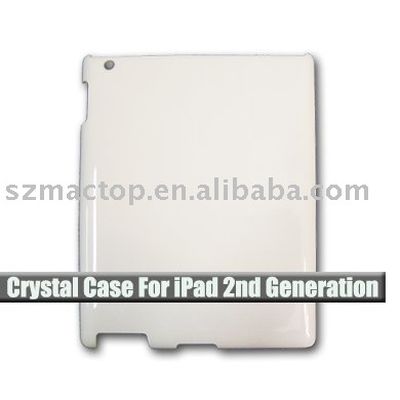 One image comes from Shenzhen MacTop Electronics (via iLounge) and depicts the rear shell of a white case claimed to be for the next-generation iPad. An opening in the top left corner of the case suggests that, if the case design is based on actual knowledge of the product, the next iPad will feature a rear-facing camera.

A front-facing camera has been widely expected to be included in the next-generation iPad as Apple seeks to expand availability of its FaceTime video chat service, but there have been conflicting reports as to whether the company will also include a rear-facing camera.

A second image, posted at Kodawarisan [Google translation], shows a pair of back shells in white and black for cases also claimed to be for the next-generation iPad. As in the other image, these cases show an opening for a rear-facing camera in the top left corner.

Also visible is a hole at the right side of the top edge of the case in the location of the headphone jack on the current model, as well as a side opening in the location of the current mute switch and volume rocker, although the opening appears smaller than would be required for the present layout. While accommodation for the dock connector is not readily visible in this image, the mysterious large opening to the left of the dock is present.

Interestingly, the description accompanying the image makes mention not only of a FaceTime camera but also an SD card slot. It is unknown, however, whether the opening at the bottom left is intended to be for such a slot. The current iPad lacks an SD card slot, with Apple offering a $29 kit providing a pair adapters to allow users to move photos to their iPads via either SD card or USB through the device's dock connector.

Update: Repair firm Powerbook Medic has discovered another set of claimed next-generation iPad silicone cases also showing a hole for a rear-facing camera and a rectangular cutout serving an unknown purpose in the same locations as the other cases.

Update 2: A video showing off several versions of the "Crystal Case" previously cited by iLounge has also been posted.


Update 3: M.I.C gadget has posted even more photos of silicone cases claimed to be for the next-generation iPad.
[ 203 comments ]

I suspect that may be an NFC radio area (total guess) like the top part of the ipad 3g.

or perhaps all ipads will be 3g capable, and that is an area for 3g/gps/nfc antenna.
again: a Wild Ass Guess (WAG).

any body else have a wag?

See where I am going with this?


You got a glass case for your iPhone 4? The shell is already made out of glass :)
Score: 1 Votes (Like | Disagree)
Read All Comments