When the iPad was first announced, one of the most exciting aspects of the device was that developers now had a large multi-touch platform to develop cool new apps. In particular, the possibility of DJ applications with multi-touch scratching and mixing captured some people's imaginations, but for a number of reasons those full-fledged apps never really arrived.

The primary reason is that the iPad has been stuck on iOS 3.2 which offers far fewer audio-related options than the 4.x build. But with the imminent release of iOS 4.2, at least one developer is going to finally deliver a full featured iPad DJ app. We've learned that Algoriddim, the makers of the popular djay application for Mac, has ported djay over to the iPad, taking full advantage of the new iOS 4.2 audio features. 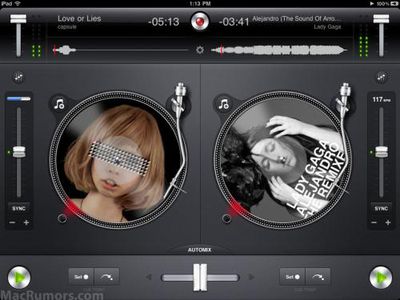 These iOS 4.2-specific features coming in djay for iPad include:

The following exclusive video shows the iPad app in action:

As you can see, djay for iPad analyzes 2 tracks in parallel (BPM detection, beat grids, etc), *while* drawing the waveforms *and* playing / processing 2 tracks in real-time (minimal latency) *and* smoothly rendering graphics (*and* possibly recording the output to storage memory) *and* possibly sharing via AirPlay!

djay for iPad will be carrying over most of the features from the Mac version including BPM syncing, Automix, Automatic transitions, Speed and Pitch changes, and EQ / Gain settings. In fact, Algoriddim tells us that the iPad version will be technically superior to the Mac version in many ways and currently performs better in some aspects. The iPad version is expected to be available in the App Store shortly after iOS 4.2 becomes available. iOS 4.2 is expected by the end of November and they've set up a teaser page to sign up for a notification of the release.