And So It Begins... Flight Control HD Coming to Mac App Store 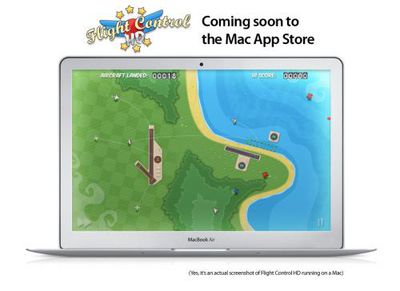 With the announcement of the upcoming Mac App Store just a few hours old, Australian game studio Firemint has already announced that they will be delivering their award-winning game Flight Control to the Mac. They released the above screenshot which is said to be an actual screenshot of Flight Control HD running on a Mac.

Flight Control is an original iOS game that was released onto the App Store in March 2009. The game was a hit, selling millions of copies. It has since been ported to PlayStation Move and Nintendo DSi. The move to the Mac is natural given the common development tools between iOS and Mac OS X development. Still, it marks the first announcement of what we expect to be many in the lead-up to the launch of the Mac App Store.