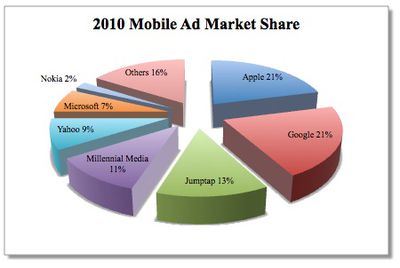 Chart from Fortune
Bloomberg Businessweek reports on data from research firm IDC showing that Apple's iAd mobile advertising platform, launched on July 1st, appears set to grab 21% of the mobile advertising market by the end of the year, tying Google for the top spot in the industry.

Apple will end the year with 21 percent of the market, according to estimates provided to Businessweek.com by researcher IDC. Google's share will drop to 21 percent, from 27 percent last year, when combined with results from AdMob, the ad network it bought in May. Microsoft will drop to 7 percent, from 10 percent.

According to Apple spokeswoman Natalie Kerris, the number of advertisers committed to running iAd campaigns has doubled since June, when Apple officially announced the launch of the program with 17 companies on-board for $60 million in spending for the second half of 2010.

At the time, Apple CEO Steve Jobs noted that the financial commitment was equivalent to 50% of the predicted overall advertising budget for the entire mobile industry over that time frame. It appears, however, that the mobile advertising industry is exploding even faster than projections had indicated, with IDC's forecast of almost $500 million in spending suggesting that even those companies losing market share are seeing strong revenue growth.

"If we are losing share, this market is growing faster than any one we've seen," Spero says in an interview. Google has increased its investments in mobile advertising and AdMob will launch new features in 2011, he said.

The report also notes that a number of strong players are staking out their territory in the burgeoning mobile ad market, from startups Jumptap (13%) and Millennial Media (11%) to established companies like Sony Ericsson, which has launched its own network, and Research in Motion, which is reportedly looking to acquire one of its own.