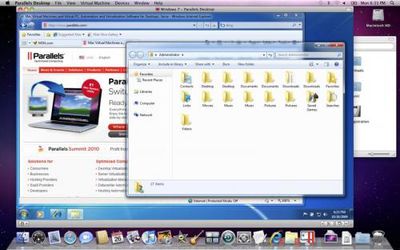 Parallels Desktop 6 for Mac
Following on last week's announcement, Parallels Desktop 6 for Mac launched today with a number of new features and refinements for users looking to run alternative operating systems in virtual environments on their Macs. As summarized on Parallels' site, the update brings enhancements to gaming and graphics, simpler setup and integration, greater manageability and mobility, and better performance.

Parallels is also offering its Switch to Mac version with additional tools for customers new to the Mac platform, priced at $99.99.

VMware, the primary competitor of Parallels in the consumer operating system virtualization market, has responded with an offer allowing users of any version of Parallels to switch to VMware 3 for only $9.99. Users of VMware Fusion 1 and 2 are also eligible for the discounted upgrade pricing, and the offer is valid through December 31st, 2010. Meanwhile brand new customers are offered 30% off of the retail price.

Note: VMWare and Parallels are both affiliate partners so sales from these links support this site financially