The emerging pattern is that while the iPhone 4 has been very well received by new owners, the survey findings aren't quite at the nosebleed levels seen at a similar point in time for the 3GS launch.

Far and away, users report that the iPhone 4's high-resolution "Retina" display is their favorite feature of the device, with nearly half of the survey respondents including it in their list of top features. Other top features include the 5-megapixel camera and the touch screen functionality. When it comes to downsides, AT&T exclusivity and network performance continue to be the biggest drag, although antenna issues and dropped calls also rank highly. 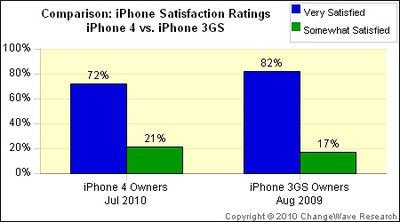 Interestingly, the July ChangeWave survey found that iPhone 4 customers experienced fewer dropped calls (5.2%) than iPhone 3GS customers surveyed just one month prior (6.3%). The result conflicts with statements made by Apple CEO Steve Jobs at the company's press conference last month admitting that the iPhone 4 drops slightly more calls than the iPhone 3GS, although the company is unsure of the reason for the real-world performance as its testing shows significantly better overall antenna performance for the iPhone 4.

ChangeWave's overall dropped call numbers for July 2010 (5.8% for AT&T vs. 2% for Verizon) are also consistently higher than those cited by AT&T, which claimed a 1.44% dropped call rate across its network in May 2010. An interesting post yesterday could shed some light on that discrepancy, however, claiming that AT&T systems only register a call as dropped once its network automatically terminates a call due to loss of the connection, a process than can take over a minute. In doing so, AT&T misses counting as dropped those calls manually ended by one of the calling parties after voice transmission has been lost but before the network terminates the call. Any ordinary consumer would consider such a manually canceled call dropped, but it may not register as such on AT&T's systems.

My theory is that AT&T lets the dead connection continue for over one minute before terminating the call. This allows both users enough time to give up on the connection and hang up themselves, thus "no dropped call."

The moral of the story is that if you want AT&T to register your call as having been officially "dropped," you must wait for over one minute with no signal for the call to cut off and register the call has having been dropped in the system.

Overall, the ChangeWave survey finds over 20% of iPhone 4 customers calling the antenna issue either "somewhat of a problem" or a "very big problem". Despite the issues, however, the iPhone 4 continues to receive higher satisfaction ratings than other smartphones and Apple's efforts to address the issue and portray it as a universal smartphone hurdle could ultimately result in an effective defusing of tensions over the antenna problems.