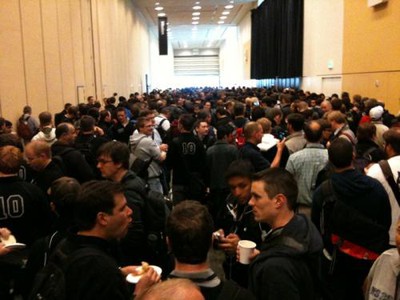 Wall of App Store icons at WWDC
With just under two hours to go before Apple CEO Steve Jobs takes the stage for his keynote address at the company's Worldwide Developers Conference (WWDC) in San Francisco, it's time for us to set the stage with final details on the latest rumors and coverage information.

As we noted over the weekend, MacRumors will be offering live text and photo updates from the keynote through MacRumorsLive.com. The main MacRumors.com page will automatically redirect to MacRumorsLive as we get closer to the event, so stay tuned here. We will also be providing Twitter updates through our @MacRumorsLive account.

For those who wish to hold off on all keynote-related coverage and announcements, we've also posted our traditional spoiler-free page and forum thread for people to be notified when Apple posts full video of the event later today.

Aside from the widely expected introduction of new iPhone hardware, a number of other possible announcements and introductions are possible. We summarized a number of them late last week, including the obvious iPhone OS 4 details and possible Mac Pro refresh and new 27" display, as well as possible cloud-based iTunes/MobileMe changes, Apple TV revamp, and Mac OS X 10.7, although those appear to be a bit farther off. Since that time, of course, additional last-minute rumors have popped up:

Update: Daring Fireball's John Gruber hints that the revamped Apple TV may in fact be making an appearance today.

so disapointed. no mac related news. no apple tv, no mac pro, no cinema display.

****ing hell. apple is just giving regular mac people the middle finger. its like everything is about mobile phones, and pads. ****ing hell
Score: 1 Votes (Like | Disagree)
Read All Comments

Thursday May 13, 2021 12:10 am PDT by Sami Fathi
Apple has fired Antonio García Martínez, an ex-Facebook product manager and author of the controversial book "Chaos Monkeys," following public and internal calls for removal and investigation due to past misogynistic statements, The Verge reports. Apple hired Martínez earlier this week to join its ads team, however, comments that Martínez made in the past sparked condemnation from users...
Read Full Article • 269 comments