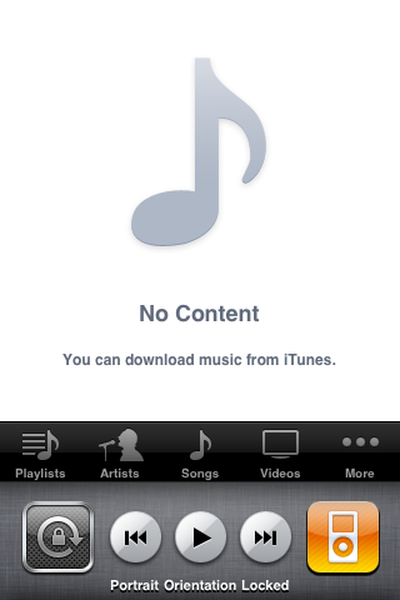 Image from MacStories
9 to 5 Mac reports that the latest iPhone OS 4 beta, released earlier today, includes several new features as part of its multitasking capabilities, including quick access to iPod controls, as well as an option for locking the screen orientation in either portrait or landscape mode.

The new features are accessed via a left-swipe from the multitasking "dock" manager in much the same way that the Spotlight search screen is accessed from the first home screen in iPhone OS 3. The iPod options include the traditional iPod icon to allow quick access to the iPod player functionality, as well as play/pause and track navigation buttons.

The screen orientation lock is a much-requested feature that is particularly handy for users attempting to use their devices while lying down or reclining. The feature receives prominent attention on the iPad, with the device's originally-planned "mute" switch being replaced before launch by a dedicated hardware button to enable screen rotation lock.

Update: Users are reporting that the screen orientation lock feature can currently only lock the screen in a portrait orientation.