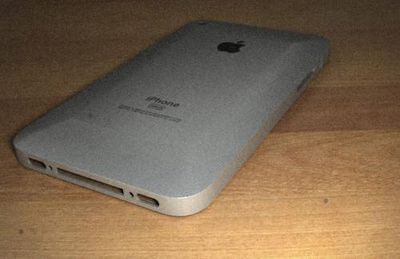 We have received a set of images purportedly depicting an iPad-inspired rear shell design for the next-generation iPhone. While we have questions about the validity of the images given their claimed origins and other issues, they are interesting enough that we have decided to publish them here on Page 2 for discussion purposes.

Text on the back of the claimed shell indicate that it is a 64 GB model, and the first line of small text includes Apple's traditional "Designed by Apple in California Assembled in China" information. Unfortunately, the images are not of high enough quality to interpret the second line of text, which would contain the model number and FCC and IC ID numbers.

The images also show cutouts for the same physical features found on existing iPhone models, with a circular camera lens hole at the top left of the rear shell, space for a ring/silent switch and volume rocker along the side, and dock connector, microphone, speaker, and a pair of screw holes along the bottom.

Metadata included with the images indicates that they have passed through Photoshop CS4, with the first two images carrying yesterday's date while the third carries a date of March 23rd.

Update: Unsurprisingly, the pictures have been confirmed to be fake.

Monday October 3, 2022 7:53 am PDT by Joe Rossignol
iOS 16.0.2 was released last month with several bug fixes for iPhone 14 issues, excessive copy and paste permission prompts, and more. Now, evidence suggests that Apple is planning to release iOS 16.0.3 with additional bug fixes. Evidence of an upcoming iOS 16.0.3 software update has shown up in MacRumors analytics logs, which have been a reliable indicator in the past. There are several...
Read Full Article • 100 comments