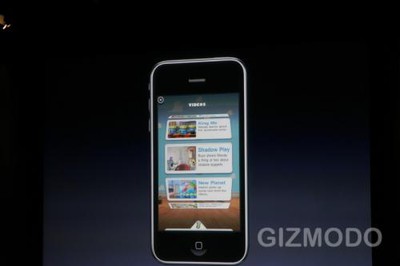 Image courtesy of Gizmodo.com
Another major feature that Apple introduced with iPhone 4 was the introduction of their new "iAd" mobile ad service. Apple promises more interactive in-app ads for advertisers and to be deployed by developers in their (presumably free) apps. The ads will be created in HTML5 and allow for interactive media and games without leaving the application themselves.

Apple will be selling and hosting ads and giving developers 60% of the revenue. Jobs admitted they were still learning and referenced Google's acquisition of AdMob:

"We do not have any plans to become a worldwide ad agency. We tried to buy a company called AdMob, and Google came in and snatched them from us. We bought Quattro instead. They're teaching us and we're learning as fast as we can."

During the Q&A, Jobs stated that developers were free to use other ad networks if desired.