iFixit and Chipworks Provide Inside Look at iPad's A4 Processor 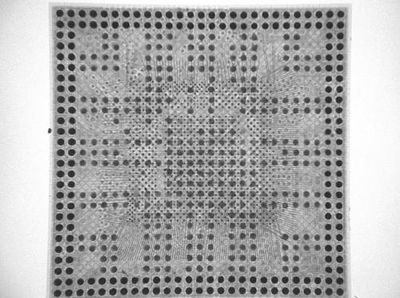 X-ray image of iPad's Apple A4 chip
The teardown experts at iFixit have been busy with the iPad over the past few days, beginning with an analysis of internal photos of the device posted to the FCC's website last Friday and continuing with a teardown of the actual device on Saturday.

Late yesterday, iFixit announced that it had partnered with chip reverse engineering firm Chipworks to open up the iPad's A4 chip, the custom Apple solution that serves as the brains of the device. The project, which is documented in a full iFixit-style teardown, involved both x-ray imaging of the iPad's components and physical cross-sectioning of the A4 chip.

According to the report, the analysis confirms that the chip utilizes a single-core processor, likely the Cortex A8, in a "package-on-package" design that offers Apple the flexibility of separate layers for the microprocessor and the integrated RAM.

There's nothing revolutionary here. In fact, the A4 is quite similar to the Samsung processor Apple uses in the iPhone. The primary focus of this design was minimizing power consumption and cost.

The full Chipworks teardown offers a number of interesting photos of the process used to crack open and examine tiny components like the A4 and confirms much of what has already been determined from iFixit's larger-scale teardown and software methods.