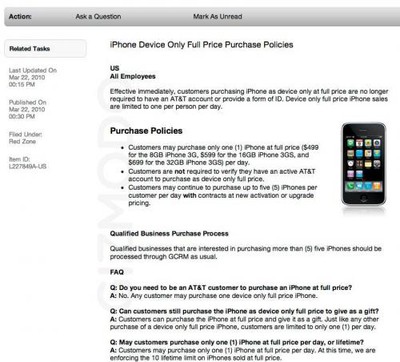 Effectively immediately, customers purchasing iPhone as device only at full price are no longer required to have an AT&T account or provide a form of ID. Device only full price iPhone sales are limited to one per person per day.

The contract-free iPhones, which reportedly will be sold locked to AT&T's network but can easily be unlocked for use on other GSM networks, are being offered at $499 (8 GB iPhone 3G), $599 (16 GB iPhone 3GS), and $699 (32 GB iPhone 3GS). Such unsubsidized, "device only" iPhone sales have been available for some time, but until this change customers were required to provide evidence of existing AT&T service.

Apple and AT&T offered similar deals for contract-free iPhones in the U.S. around this time last year as Apple presumably sought to unload excess inventory ahead of a refresh later in the year.