Apple today announced that Board member Jerome "Jerry" York has passed away after suffering a cerebral hemorrhage Tuesday night.

"Jerry joined Apple's Board in 1997 when most doubted the company's future. He has been a pillar of financial and business expertise and insight on our Board for over a dozen years," said Steve Jobs, Apple's CEO. "It's been a privilege to know and work with Jerry, and I'm going to miss him a lot."

Update: Apple has updated its main home page with a tribute to York, temporarily removing all of its featured product image promos. 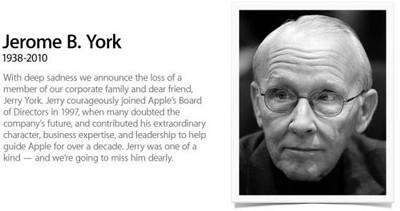 peace be with his family during these difficult times.
Score: 1 Votes (Like | Disagree)

the vj
And that was it!

One moment alive and the next minute.... gone!

That is why we have to be happy and specially shre with others.

There is a saying I always remember because is a law:

"The only pain you should be afraid of is the love you hold" because after the person is gone is gone.

This gentleman was part of Apple and he mande many things possible and he made us happy too. Best wishes to his families and friends and I am sure he will be well remembered.
Score: 1 Votes (Like | Disagree)
Read All Comments

Monday July 13, 2020 6:50 am PDT by Joe Rossignol
Earlier this year, Apple agreed to settle a U.S. class action lawsuit that accused the company of "secretly throttling" older iPhone models. Now, eligible iPhone owners are beginning to be notified about their legal rights and options. Under the proposed settlement, Apple will provide a cash payment of approximately $25 to each eligible iPhone owner who submits a claim, with its total payout ...
Read Full Article • 127 comments

Monday July 13, 2020 4:22 am PDT by Tim Hardwick
MySmartPrice has spotted certifications for three new Apple batteries that it believes could be for the upcoming iPhone 12 lineup, despite them being less capacitive than the batteries in the current iPhone 11 series. The batteries are identified with the model numbers A2471, A2431, and A2466, and appear on Safety Korea, China's 3C, and the Danish agency UL Demko. Apple is expected to...
Read Full Article • 129 comments