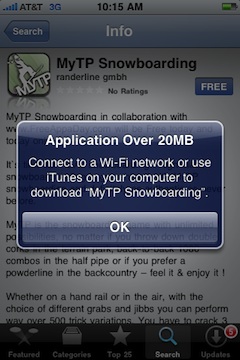 MacRumors has received reports from several readers noting that the download cap for iPhone applications installed via 3G has been increased to 20 MB, a change that also appears to apply to iTunes Store content. Previously, users attempting to download content over 10 MB in size were prompted to connect to a Wi-Fi network or use a computer to obtain the applications. With the ceiling now increased to 20 MB, developers trying to stay under the cap limits in order to avoid frustrating users unable to install their applications while on the go should have significantly more flexibility for their applications.

The change is particularly significant given the impending launch of Apple's iPad tablet device, with 3G-capable models due to be released in April. The increased screen size and capabilities of the iPad will allow developers to create more sophisticated applications that will tend to be larger in size than iPhone applications.