On Tuesday, less than 24 hours before Apple's media event to introduce the iPad, publishing giant McGraw-Hill's CEO Terry McGraw confirmed that Apple would be introducing a tablet at the event. McGraw also confirmed earlier reports that Apple and McGraw-Hill had been working closely together on e-books, particularly e-textbooks, for the device. 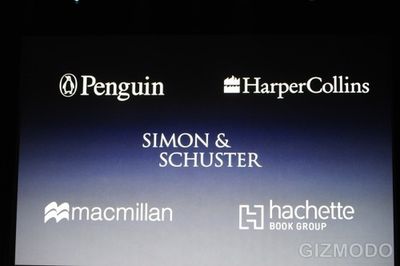 McGraw-Hill's content was, however, nowhere to be found in Apple's presentation at the media event, and VentureBeat reports that Apple CEO Steve Jobs had immediately removed McGraw-Hill from the presentation after McGraw's disclosure on CNBC.

McGraw-Hill is bigger than most of the publishers on this slide. But insiders say as soon as Terry shot his mouth off on CNBC, Jobs had the company cut from the presentation. We won't know for a few weeks if McGraw was only wrist-slapped, or if he's been thrown out of the game.

The move is reminiscent of Jobs' reaction after a leak by graphics card manufacturer ATI just prior to Macworld San Francisco 2000 that revealed Apple's plans to introduce new iMac and Power Mac models using the company's graphics cards. In that case, Jobs reportedly pulled all mention of ATI from his presentation at the last minute, although the products obviously continued to ship with ATI products inside.

Update: According to Digital Daily, McGraw-Hill has denied that it was scheduled to be a part of Apple's media event presentation and that the company had advance knowledge of the iPad's details.

"As a company deeply involved in the digitization of education and business information, we were as interested as anyone in the launch of the new device, although we were never part of the launch event and never in a position to confirm details about the device ahead of time," Steven Weiss, VP of Corporate Communications for The McGraw-Hill Companies said in a statement given to Digital Daily.

According to Weiss, McGraw's speculative comments were simply rehashing the many rumors about Apple's tablet introduction and were misconstrued by others as a confirmation. Digital Daily also notes that its sources have indicated that McGraw-Hill had not seen a demonstration of the iPad prior to Apple's media event.