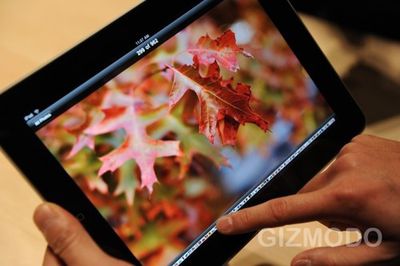 Engadget and Gizmodo have both posted early hands-on impressions of Apple's new iPad tablet, having had the chance to play with the device after today's media event in San Francisco.

Both reviews rave about the iPad's speed, calling it "blazingly fast" with no lagging at any point. Responsiveness of the system and applications, as well as loading of web pages, is seen as excellent by those who have handled the device. The 1024 x 768 screen is also well-regarded in both reviews, described as "stunning" with the ability to show small text "crisply".

Reports on the feel of the device are mixed, however, with Engadget calling it "not light" and "pretty weighty" and Gizmodo calling it "substantial but surprisingly light". Notable drawbacks experienced in the few minutes of testing include the lack of Flash, multitasking, and camera. Also noted is the lack of "razor sharp" graphics for scaled up iPhone applications, although it seems to be a decent solution to allow Apple to offer immediate full-screen compatibility for existing iPhone applications.

iLounge is in the early stages of putting together an extensive "first look" feature, but has already shared pricing for a number of accessories, including the basic dock ($29), keyboard dock ($69), and case/stand ($39). They also note that while the iPad was fast, there was a bit of bugginess in their time with the device.

From a gaming perspective, Joystiq similarly notes that the iPhone games "are scaled up and look like it", although the iPad does seem to allow for greater accelerometer sensitivity for iPhone games and also allows less of the screen to be obscured by the user's thumbs while gaming. Of particular note, Apple is planning to feature iPad games in a separate section of the App Store, leading to questions about whether users with both an iPad and iPhone/iPod touch will have to purchase two separate applications or whether developers will be able to find a way to "bundle" versions together for the two device sizes. In the absence of such a program, Joystiq wonders whether iPad users will opt to spend the money for the dedicated apps when their iPhone apps will be playable on the device.

I felt the same way. But Apple gets you on the *total* experience. How everything is brought together.

It's genius. Apple took the iPod Touch paradigm and expanded it to encompass a total computing experience (minus only a couple of things.)


Well at this point it's not for me, but the best thing is that with every update it will improve. It's like iPhone OS 1.0, look where it's now. The same will be with iPad.
Score: 1 Votes (Like | Disagree)

Developers will cream themselves over this. Apps will be much more powerful, intuitive, and capable.

It's missing a couple of things. Like every hit Apple product. Butt that's not what sells it. It's the overall experience.

We're looking at the future here. It's getting rave reviews from the industry. And the price is right, and not only that, these will be even cheaper in due course, a la iPhone.

Tablet-makers, start your photocopiers. Apple just hit another one out of the park.
Score: 1 Votes (Like | Disagree)
Read All Comments