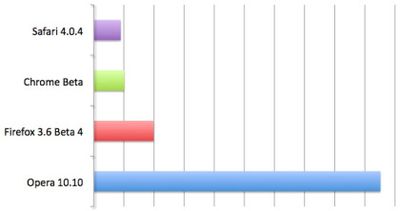 SunSpider JavaScript Benchmarks of Mac Browsers
(Shorter bars represent faster performance)
One of the touted features of Google's Chrome browser, which finally saw the release of an official beta version for Mac yesterday, has been its speed in loading and rendering pages. In investigating that aspect of its performance, Computerworld has found that, while Chrome performs extremely well in the SunSpider JavaScript benchmarking test, it only comes in a close second to Apple's Safari browser.

According to tests run by Computerworld, the Chrome beta, which Google launched yesterday, is the second fastest of four Mac browsers tested. Chrome renders JavaScript 10 times faster than Opera 10.10 and almost twice as fast as Firefox 3.6 Beta 4, the most recently-released Mac version of Mozilla's open-source browser.

This contrasts with the Windows platform, where Computerworld previously found Chrome to be the top performing browser in the same testing suite, clocking in at 30% faster than Safari for Windows.

JavaScript performance has become a key indicator of browser speed in recent years, with Computerworld noting that the release of Firefox's TraceMonkey JavaScript engine last year set the stage for an arms race in JavaScript performance, one that is currently being led by WebKit-based browsers such as Safari and Chrome.

Wednesday July 6, 2022 4:59 am PDT by Joe Rossignol
Apple today announced that the new MacBook Air equipped with the M2 chip will be available to order starting Friday, July 8 at 5 a.m. Pacific Time. Apple said deliveries to customers and in-store availability will begin Friday, July 15. MacRumors exclusively reported that Apple planned to launch the new MacBook Air on July 15, and the date has now been confirmed by Apple. Customers will be...
Read Full Article • 161 comments