Following up on early benchmarking tests that showed Apple's new quad-core Core i5 and Core i7 iMacs boasting significant performance improvements compared to their Core 2 Duo-based counterparts, Macworld has utilized its own Speedmark suite of real-world tests and found similar results.

Speedmark is Macworld Lab's standard test tool for benchmarking new and upgraded systems running Mac OS X. It uses real-world applications and everyday tasks. It is a general-purpose suite that includes tasks everyone from a high-end user to a new user performs every day.

Macworld Lab follows a detailed script to perform the 17 tasks. Each task is performed three times. We compare the results to a 2.13GHz MacBook with 2GB RAM (Mid 2009), which is assigned a score of 100. We then take the geometric mean of the normalized scores. 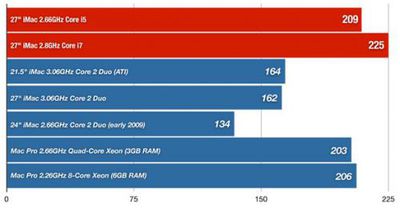 With the new 2.66GHz Core i5 iMac and the 2.8GHz Core i7 iMac, Apple has not only blurred the line between consumer and professional systems, it's darn near erased it. The 2.66GHz Core i5 iMac offers faster performance at most tasks than the 2.66GHz Quad-Core Mac Pro. The Core i5 iMac also has more memory and more storage space than the 2.66GHz Quad-Core Mac Pro, while being $500 less (plus you get a 27-inch screen with the iMac). Unless you absolutely require additional PCI cards, multiple internal hard drives, or a lot of RAM, the Core i5 iMac makes a strong case for the being the go-to system for most Mac professionals.