The delivery of the Core i7-based iMacs have generated the usual discussion threads about unboxing, impressions and benchmarks. The performance of the high-end iMacs have been of particular interest due to the new incorporation of desktop-class processors into Apple's consumer line.

Various Geekbench and Cinebench scores for the new i7 iMacs have been reported. The best visual representation is provided by this blog entry at Timon-Royer.com which compiled the Geekbench scores across all currently shipping iMacs: 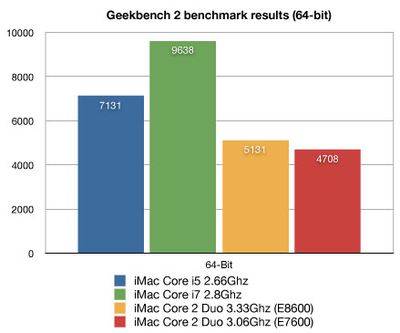 Longer bars are better with the new i7 iMac (green) performing significantly better than the Core 2 Duo 21.5" iMacs. The i7 even represents a sizable (35%) performance increase over the i5 model and costs only $200 more. In fact, the i7 iMac benchmarks compare favorably to 2.93Ghz Quad-Core Mac Pro which costs significantly more.

Update: Timon Royer has updated his blog post with a new chart correcting a minor error on the Core i5-based iMac data and adding results for the latest Mac Pro models for comparison purposes.

There is no doubt that both the core i5 and core i7 represent significant values. However, these are SYNTHETIC benchmarks that treat hyperthreading cores the same as the physical cores in the core i7 cpu. Thus, the 35% boost over the core i5 is not surprising. One should be aware, however, that in most real life situations, the additional computing power provided by hyperthreading is often only marginal, at best 5-7% beyond what can be achieved by the four physical cores, and this requires programs that operate in a highly parallel fashion, such as video encoding. For many applications, there is simply no difference and for some, there is actually degradation because the instructions provided by the application cannot be executed in parallel and result in the stalling of the physical cores. This is not a problem in PCs because hyperthreading can be turned off in the BIOS if one finds this effect or if the hyperthreading is causing the chip to overheat, which does happen. From what I have read so far, it would appear that there may not be any way to accomplish this in the iMac. Thus, one should consider carefully the type of software to be run before deciding. Bigger is not always better.

Also, do not be confused by Intel's naming protocols. The 2.8 GHZ core i7 on offer is NOT a Nehelem chip, but rather uses the same Lynnfield architecture of the 2.6 core i5 chip. Both use dual channel memory controllers (as opposed to the faster tri-channel memory for Nehelem chips), are capable of only half the video bandwidth of the Nehelem chip and also utilizes a higher latency, slower interconnect bus than the Nehelem core i7's. On the plus side, the energy efficiency of these Lynnfield chips is much better than the first generation Nehelem chips. They use much less electricity both on idle and at load than the Nehelem chips, which is probably why Apple waited for them to be released. Nevertheless, the 2.8 core i7 chip with hyperthreading will run significantly hotter and draw mopre power than the core i5. So if heat and/or power consumption are a concern, stick with the i5.

If you plan on purchasing the 27 inch iMac, avoid the entry level 3 GHZ core 2 duo model if your budget permits. Even though the clockspeed is as much as 20% greater than the i5, the core 2 duo chips are in fact much slower overall, both due to the fact that they have only two cpu 2 cores, and to the fact that the core i5/i7 architecture has been significantly optimized in its re-engineering. The real world difference is probably greater than the Geekbench bar graph would indicate. The extra $300 needed to move up to the core i5 can truly worth it in terms of both performance and energy efficiency.

Finally, there are numerous sites across the web that have benchmarked the two quad core chips currently on offer in the 27 inch iMac using real world software and parametrics. None of the ten or so reviews that I've seen shows any program or group of programs benefiting from a 35% increase in speed when using the 2.8 GHZ i7 Lynnfield versus the 2.6 GHZ i5 Lynnfield. In fact, the most I have seen runs 7 to 10%, with most programs showing only a negligible increase. It is likely that you will derive more oomph from your system by adding more RAM, particularly if you run Windows or Linux in a virtual machine or if you run many programs at once. Given current prices for RAM, you should be able to easily double the amount of RAM in your system to 8 GB for less than $100. The remaining $100 or so would go along way toward the purchase of Apple Care (not a bad idea given that this is a brand new machine design), a Time capsule, a 1.5 TB external hard drive or perhaps the purchase of an iPod or Apple TV.
Score: 1 Votes (Like | Disagree)
Read All Comments